Every year the Nebraska boys state basketball tournament is full of terrific storylines, and 2020 is no different. The action begins on Thursday morning and runs through Saturday night, and by the end only six teams will be left hoisting a trophy.

Here are a few of the storylines to follow as the action gets underway at Pinnacle Bank Arena, the Devaney Center, Lincoln Southeast and Lincoln East on Thursday.

>> There’s only one current Husker commit in this year’s field, but he won’t be playing basketball at Nebraska. Football walk-on commit Ty Hahn led Johnson-Brock to an 18-8 record and the No. 7 seed in the Class D2 state tournament. 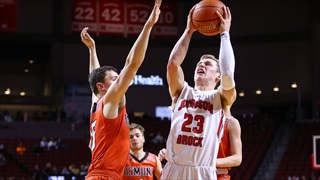 The Eagles are the reigning D2 champions, but Hahn is the only one back from last year’s team who averaged at least 2.0 points. He’s had to carry a heavier load this season but has embraced that role. He’s putting up 19.8 points, 7.5 rebounds, 1.9 assists and 1.3 steals per game while shooting 53% from the field, 39% from 3 and 77% from the free-throw line, and he scored 25 of Johnson-Brock’s 31 points in the district final to punch the Eagles’ ticket to state.

“It’s been different because last year we had so many weapons to score and guys that have had the experience for a couple years and this year we had to make the adjustment of slowing down our pace and getting the shots we want,” Hahn said. “For me, I don’t mind taking a heavier load if that’s what we need in order to win. As the year has progressed we have had more of our younger players make big plays and big contributions in games which has been huge for us.”

Whether the season ends on Thursday, Friday or Saturday, Hahn this will be Hahn’s final week as a competitive basketball player, something that hasn’t quite set in yet for him.

“It’s pretty bittersweet since I’ll be able to finish my career playing at the state tournament, but I’ll miss playing basketball as a whole,” Hahn said. “Overall I’m just really thankful for the memories and accomplishments with teammates and coaches.”

The Eagles will take on No. 2 Falls City Sacred Heart in the first round on Thursday at 7 p.m. at Lincoln East.

>> Bellevue West, led by Wisconsin commit Chucky Hepburn, earned the No. 1 seed in Class A for the second straight year. Last season, however, the Thunderbirds fell in the semifinals. They’re hoping to avoid that same fate this week. 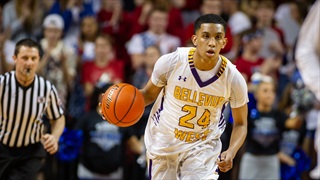 John S. Peterson
Chucky Hepburn bringing the ball up the court in the 2019 state tournament.

“We are way more focused than we were last year,” Hepburn said. “I believe that everyone including the players who suit up have a mindset that we have to come in this tournament and dominate. Yeah, we are the one seed, but everyone thinks that Millard North will win it, so we just have to come out and make a statement right away.”

This week is about more than just seeking a state title, however. Basketball is a family affair at Bellevue West. The starting lineup features two sets of brothers — Chucky and Trey Hepburn, Frankie and Louis Fidler — and senior forward Owen Woodard is head coach Doug Woodard’s grandson. Chucky and Hepburn (both juniors) will be playing with their older brothers for the last time this week.

“Man, it’s so crazy to me,” Hepburn said. “I was just thinking about that today and in practice and it really hit me. We’ve been playing with each other for so long it feels like it won’t ever end. This week definitely means a lot to us because we want to go out the right way.”

Bellevue West will face No. 8 Elkhorn in the first round at 2 p.m. at Pinnacle Bank Arena.

>> The No. 3 seed in Class A is Omaha Central, the 2019 runner-up. The Eagles nearly had the game won before Omaha South snatched the victory away in the final seconds. Central beat Omaha South during the regular season, but the state tournament is a different beast.

“The loss in the championship has given us fuel the whole season,” senior point guard Max Polk said. “We labeled it as the ‘vengeance tour’ because we had to watch South celebrate and cut down the nets in front of our face and you couldn’t ask for more than to be able to get revenge on them this year.”

The Eagles will get their chance right out of the gates as Central will face No. 6 Omaha South in the first round at Pinnacle Bank. Central features one of the best senior backcourts in the state in Polk and Latrell Wrightsell Jr., two four-year varsity players looking to lead “Champ High” back to the title game.

“It has hit me that this is my last time wearing a Central uniform, so I am embracing this moment and going to go out there and have fun,” Polk said. “These are memories that are going to last the rest of my life and I won’t be able get it back.”

It won’t be easy, though. South has a tough and experienced senior backcourt of its own in Wayne State signee Jay Saunders, Ty Griggs and Skyler Wilson. Tipoff is set for 8:45 p.m. on Thursday.

>> This year’s field includes last year’s champion in five of the six classes. Lincoln Pius X moved up to Class A after current Husker Charlie Easley led the Thunderbolts to the Class B title last season, but every other champion has a chance to repeat.

Hail Varsity will have coverage of all these story lines and plenty more so stay locked in here as the state tournament plays out.