Despite cancellations all across the country and work over the past week, the Nebraska boys state basketball tournament rolled on Thursday, Friday and Saturday, and though the doors were barred to the general public, I was there all three days and watched all 18 games at Pinnacle Bank Arena.

I’m opening up my notebook and sharing some of the best stuff that I didn’t touch on in my tournament round-ups. Let’s dive in.

First of all, let’s get tournament honors out of the way. I got to see and have full stats for all of the Class A games, so I’m going two deep in All-Tournament teams here.

I didn’t get to see the two Class B first-round games at the Devaney Center and I don’t have full box scores for those games, so I’m going to go with one team based on what I saw and know.

For the other four classes, I’m going with an MVP for each since I didn’t get to see as many of those games.

>> BRLD coach Cory Meyer on the limited number of fans:

“I feel bad for all the fans. We’ve had a great following and we would have had a packed house here tonight. I feel bad for them, that they couldn’t be here. I know they were there in spirit. I know there were a lot of cheers online, Facebook, Twitter and all that. Their spirits are here with us and I definitely want to thank them for everything. It’s been an awkward tournament, but I am so thankful that they allowed us to play this thing so that we were able to finish on top.” 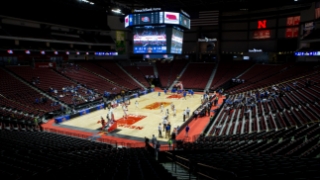 >> Laurel-Concord-Coleridge senior Noah Schutte on the LCC community not being there:

“Right away, we kind of all felt down about it. But we knew how much our community supports us and they’re all back home watching. They watched our game in the gym, classrooms. They all gathered together and watched it. They’re just a great support behind us all the time.”

>> Omaha Skutt coach Kyle Jurgens on the opportunity to play:

“I’m very grateful to the NSAA for taking the proper precautions to make sure everybody was safe but at he same time keeping in mind that these guys have gone through a lot. It was a weekend for them to have the opportunity to finish their goals or work towards finishing their goals. The fact that they allowed them that opportunity, we’re certainly grateful for that as well.”

“It means everything. Like Coach said, thank you to the NSAA for allowing us players to participate in the state tournament. You see all these cancellations going on around the country. You saw last night, the Scottsbluff and Bellevue West games got featured on ESPN, one of the premier sports programs in the country. That’s definitely big for the NSAA and Nebraska kids to be on that platform.”

>> Bellevue West coach Doug Woodard on what winning this state tournament will mean for his players:

“You’re going to remember a state championship anyway; it’s just a tremendous accomplishment, obviously. But for this year, the uniqueness, to be one of the only states still playing, the NBA shut down, the NCAA shut down, we’re not having a College World Series, we’re not having the Masters or it’s going to be delayed, but we got to play. They’ll be telling their grandkids this. I’ll be gone by then, but they’ll be telling their grandkids about this and nobody will probably believe them.”

Four teams arrived in Lincoln with perfect records, and three of them finished off the perfect season.

Omaha Skutt took the Class B title and finished 26-0 on the season. The SkyHawks fell in the semifinals last season so their streak sits at just the 26 wins this season.

Auburn went back-to-back in Class C1, finishing 29-0. The Bulldogs also won their last seven games last season including three at the state tournament, so their streak sits at 36 straight wins. 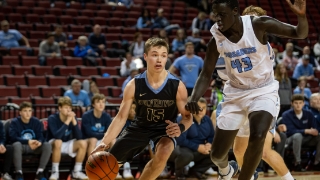 The most impressive streak, however, goes to BRLD. The Wolverines also went 29-0 this season to win the C2 crown for the second straight year, and they also won their last 23 games in 2018-19, giving them 52 straight wins, the sixth longest in Nebraska history.

We also saw two different teams sweep both the football and boys basketball state titles this year in Bellevue West and Omaha Skutt.

The crowds were limited to mostly family, but there was plenty of family on the court as well, particularly with some of the champions.

Bellevue West is the biggest example of this. The Thunderbirds have two sets of brothers starting in Trey and Chucky Hepburn and Louis and Frankie Fidler. Back-up forward Owen Woodard is also Doug Woodard’s grandson.

What a difference 2 years (and a different result on the scoreboard) make!

Jaycee (well lets be honest, all the @TBirdBB fans) had quite the swing of emotions in that 4th quarter.

In C1, Auburn starts a pair of cousins in Cam and Ryan Binder. Cam was the hero of last year’s tournament and led the team in scoring in this year’s tournament as well, but Ryan, a sophomore, gave Auburn a big spark early against Ogallala with eight first-half points.

“I gave him the biggest hug right away,” Cam said after the game. “You saw me running out there, I was trying to give someone a hug but no one was coming to me. Just to do it with him, we’ve been like brothers since day one. We always played with the same AAU team since third grade until about ninth grade. We’re just like brothers, just the brotherly love. And I feel that for all these guys.”

Saturday’s Class B title game featured two outstanding points guards in Skutt’s Tyson Gordon and Omaha Roncalli’s Jack Dotzler. Each of them became their school’s career leader in both points and assists this season, and it was fitting for them to go out competing against each other.

Dotzler and Gordon have been friends for  along time. Dotzler called the PAL games between St. Wenceslaus featuring Gordon and his St. James Seton team in middle school “some of the best games I can remember.” 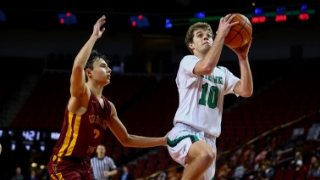 Gordon’s SkyHawks got the better of Dotzler’s Crimson Pride in a  one-sided game on Saturday, but the two have had some epic battles throughout their high school careers, and they’ve even spent some time playing together during the summer.

“There’s a reason he’s going Division I in football and that’s evident by his play in football, but he very well could have gone to a very high level school in basketball as well and he put that on full display this year,” Dotzler said about Gordon. “We just talked before the game and said no matter what happens, it’s not going to change our friendship, it’s not going to change how we think of each other. We’re both going to go at each other because that’s all we’ve ever known. It’s a special relationship with him.”

Gordon, who is headed to play football at North Dakota State, called playing against Dotzler one final time “bittersweet,” and echoed what Dotzler said about supporting each other no matter what.

Dozier’s basketball career will continue next ear a Morningside.