Millard North all but had the Class A state title wrapped up on Saturday night. Hunter Sallis hit a pair of free throws with 3:58 to go to put the Mustangs up 62-48.

Bellevue West wasn’t ready to give up, however. Frankie Fidler missed a shot at the basket, but it bounced outside and freshman Josiah Dotzler recovered it, drawing Millard North point guard Jadin Johnson’s fifth foul in the process with 3:47 to go. Dotzler calmly sank both shots.

Millard North went 0-for-2 at the foul line after a Bellevue West foul and Chucky Hepburn got the ball back to Dotzler in the corner, right in front of Bellevue West’s bench. He buried a 3-pointer to cut it to nine. Hepburn stole a Millard North pass and pushed it ahead to Frankie Fidler on the right wing, but instead of taking the shot himself he made the extra pass to Dotzler in the corner, and he buried it again from the same spot.

“I knew he’s put in the time and he hit one before, so I just trusted him and threw it to him, and he knocked it down,” Fidler said.

The freshman scored eight points in 33 seconds to cut the lead in half. 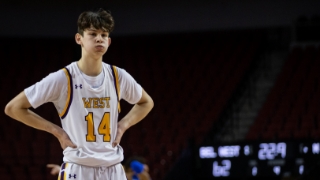 “That was all set up by my teammates right there,” Dotzler said. “They knew that I could hit them and they trusted me with the ball, and Coach had faith in me and put me in the game in a  critical time and I was able to deliver those shots.”

After a Bellevue West timeout, the Thunderbirds picked up the pressure and forced another turnover as senior Trey Hepburn dived on a loose ball near halfcourt and passed it ahead to Louis Fidler for the layup. Down to four.

Millard North had two chances to score on the next possession, but the Mustangs came up empty again, missing at the basket then going 0-for-2 at the line after an offensive rebound. Bellevue West put the ball in Chucky Hepburn’s hands once again and he found Louis Fidler slipping to the rim for another layup. Two-point game with 2:21 to play.

After a miss by Millard North, the team traded offensive fouls, giving the ball back to Bellevue West with 1:34 to play. Senior John Shanklin took advantage of the extra possession and scored inside to tie the game at 62-all with 1:23 to go on another feed from Chucky Hepburn.

Millard North called timeout, but after play resumed a Mustang got flustered and traveled, turning the ball back over with 67 seconds to play. Bellevue West ran 40 seconds off the clock before a Mustang went for the steal and committed a foul.

Frankie Fidler stepped up to the line and sank them both to give the Thunderbirds the lead with 22 seconds to go, capping a 16-0 run.

Millard North put the ball in Sallis’ hands and Chucky Hepburn switched onto him as he dribbled towards the wing. Jasen Green went to set a screen with about 10 seconds on the clock, but Frankie Fidler showed and Hepburn got over the top, forcing Sallis to pick up the ball.

With no one else open and the clock winding down, Sallis lobbed it up to Green who spun baseline and threw up a tough-angle floater that came up short as the buzzer sounded.

Bellevue West is your Class A state champion. #nebpreps pic.twitter.com/B7EBHCUUjm

“It was for Hunter up top, a pick on the wing and he’s been really good about finding guys too if he penetrated,” Millard North coach Tim Cannon said. “We also told him if they sat in a zone, just swing it and someone will take a 3 to win it. He couldn’t get out of that double-team very well and we really got slowed down with what we were doing.”

Sixteen unanswered points in just under four minutes; from the agony of defeat to the thrill of victory just like that.

Millard North used a 7-0 run in the first quarter to pull ahead 15-9, and it never trailed again until Fidler’s game-winning free throws. The Mustangs’ lead hit double digits at four different points, but each time the Thunderbirds fought back to keep the game from becoming what the other five championship games became — a blowout.

Did the Thunderbirds ever have any doubt?

“No, sir,” Chucky Hepburn said. “I knew we were going to come back sooner or later. We just had to trust in each other. In that fourth quarter, three minutes left, we just found the energy to come back and high together as a team.” 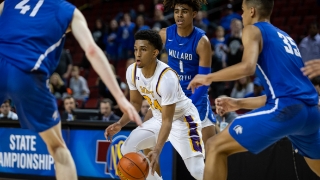 John Peterson
Chucky Hepburn struggled to score on Saturday but made an impact in other ways with seven assists, five rebounds and four steals.

Hepburn, a 2021 Wisconsin commit, couldn’t buy a bucket most of the night, shooting 1-of-13 from the field with the only make coming from the Panhandle on the state outline at halfcourt. He finished with just seven points, but also dished out seven assists (four coming in the fourth quarter) and grabbed five rebounds and four steals.

“I was [getting frustrated],” Hepburn said. “I couldn’t hit a shot. That frustrated me a lot but I knew I had to keep going. I know I showed it in my body language, but I knew I could keep going and keep the energy on defense and create some pressure for my team.”

Dotzler’s free throws were just as big as the 3s considering the foul put Johnson on the bench for Millard North. The junior point guard played just eight minutes as he dealt with foul trouble all night.

“It hurts a lot,” Cannon said. “Jadin had a good tournament and was giving us a little bit more offense going to the basket when they really denied Saint [Thomas] and Hunter, and then Hunter’s got to handle the ball all game on an ankle that’s not totally right … To have JJ handling the ball and playing defense would have been a huge factor.”

Millard North led 34-26 at halftime thanks in large part to a big effort on the offensive glass. Led by 2022 Nebraska target Jasen Green’s six offensive rebounds, the Mustangs pulled down 11 caroms on that end and converted them into 16 second-chance points. In the second half, Bellevue West only surrendered one offensive rebound and it didn’t produce any points for the Mustangs.

John Peterson
Hunter Sallis and Chucky Hepburn – two close friends who grew up playing together – went head-to-head for the Class A state championship on Saturday.

“We competed,” Bellevue West coach Doug Woodard said. “The first half we watched. They were coming, they were coming hard and if big guys that are long and really athletic are coming hard and you’re not getting a body and engaging them, it’s going to be a struggle. And it was. We engaged them, got bodies in the lane and had a better result.”

The Fidler brothers led Bellevue West with 16 points each. Frankie also grabbed seven rebounds while Louis dished out three assists in their final game together.

“They do different things, but their effect on the game is similar in that they can both score, they can both rebound, they both can run,” Woodard said. “As you see, Frankie’s a little more cerebral. He figured out last night he had it going, and his teammates got him the ball. Tonight, his teammate had it going and he was smart enough to figure ‘swing it one more pass.’ Louis is a little more attack-oriented; trying to get him to slow down some is a chore. But his attacking of the rim there was a huge part of that comeback. It’s rare to have two sets of brothers starting in a situation like this and it’s a neat thing.”

Louis Fidler called the feeling of completing the comeback “indescribable.” He and Trey Hepburn are two of the three seniors in Bellevue West’s starting lineup and seven on the team.

“It’s the best feeling in the world,” Chucky said about getting a win in the seniors’ last game. “I can’t even express the feeling, knowing that we sent them off the right way to college and this will be a moment the we won’t ever forget.” 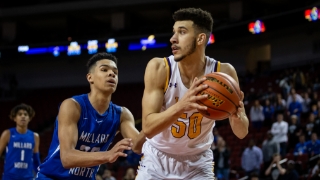 Louis is headed to play basketball at Morningside while Trey is uncommitted. Shanklin, the fifth member of the starting lineup, finished with 14 points and eight rebounds. He’s signed to play at Division II Black Hills State.

Max Murrell, a Stanford signee, finished with 11 points on 5-for-5 shooting, five rebounds and two blocks. He’s the only senior starter for Millard North.

Both teams return a lot including their stars in Hepburn and Sallis — two close friends — and a rematch at the same time in the same place isn’t out of the question. However,  Hepburn and the Thunderbirds took this round, avenging a regular season loss, and get to take home the hardware.