Nebraska’s coaches aren’t huge fans of graduate transfers. When a guy is a guaranteed one-and-done, it’s hard to know exactly what his motivation is. Is he there for the team or himself?

However, after Fred Hoiberg and his staff took over at Nebraska, the first two new commitments they landed were from graduate transfers: Haanif Cheatham and Matej Kavas. Hoiberg and recruiting ace Matt Abdelmassih needed a couple adults in the locker room to help guide an almost entirely new roster through a transition phase, and Cheatham and Kavas were the pair they targeted.

On Sunday, those two take the court at Pinnacle Bank Arena for the final time as the Huskers host Northwestern on Senior Day. Riding a 13-game losing streak to the first 20-loss season in program history, Nebraska hasn’t exactly had the season anyone involved with the program was hoping for. Even so, the seniors feel like they’ve set the tone for the program moving forward.

“None of us is happy with our record or our wins, but I think Haanif and I set up a foundation for this program,” Kavas said. “We showed the hard work and leadership that needs to be done and we showed that you can never give up. We've had some good games even though we didn’t get as many wins as we wanted. For example, Maryland — we were right there so we showed that we could compete against the best. Now we just need to do it for 40 minutes like Coach has been saying”

Cheatham echoed the same message. He believes the seniors’ legacy in Lincoln will be one of resiliency.

“When things get tough, don’t quit,” Cheatham said. “Continue to fight, continue to work hard and things are going to work out. From July, since our Italy trip, I think we came a long way from that. Matej and I and the whole team, we got a little tougher. We faced a lot of adversity but we overcame it and we continue to fight through it and I think that’s going to be a foundation for the years coming up with his team.”

Lincoln was Cheatham’s third stop during his college basketball career. A native of Fort Lauderdale, Florida, he committed to Marquette out of high school as a highly-regarded recruit. The 6-foot-5 guard had a terrific freshman season, averaging 11.8 points per game while starting all 33 games and earning recognition for his defense. However, his scoring and playing time both decreased as a sophomore, and after five games of more of the same during his third season in Milwaukee, he left the program “for personal reasons,” according to Marquette coach Steve Wojciechowski. 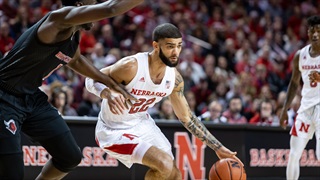 Cheatham transferred closer to home at Florida Gulf Coast in December, and he received a hardship waiver from the NCAA to play right away the following season. However, he played in just 10 games before a chronic shoulder injury became too much to handle. He shut it down for the year and had shoulder surgery, and after graduating he entered the NCAA Transfer Portal.

Cheatham joked that the 11 open rosters spots was what sold him on coming to Nebraska, but it was really the people — Hoiberg, his staff and the fans — that drew Cheatham to Lincoln.

He’s leading the team in scoring at 12.4 point per game and has reached double figures in 20 of his 28 games with a high of 26, and he’s leading the team (among those with more than eight shot attempts) in field goal percentage at 47.3%. Despite his individual success on the court, the Huskers are sitting at seven wins.

Even so, Cheatham has no regrets about picking Nebraska.

“Honestly, I made the best decision ever,” Cheatham said. “Playing with this team, playing with the coaching staff, playing for the fans at PBA, it’s been an amazing time, it’s been an amazing experience. I know I wouldn’t want to be anywhere else. Honestly, I wish I could have been here for all four or five years. It’s been a great a time, I love it here. Like I said, I made the best decision I’ve ever made…

“We’re on a losing stretch but you see PBA packed out every night. I think the people here, the connections, the resources here at the University of Nebraska are different. It’s probably something you won’t see at other universities. The basketball experience is great, the coaching staff is great and I honestly truly believe that.”

Cheatham still has one more game at the Vault, but Kavas’s last game in a Husker uniform was back on Feb. 15. One minute into his first stint against Wisconsin, Kavas suffered a season-ending hand injury. His college career has been over for a couple weeks.

Growing up in Ljubljana, Slovenia, Kavas started thinking about playing college basketball in the United States when he was 16 or 17. His older brother, Andraz, had success playing at Harding University in Arkansas, and Matej wanted to follow in his footsteps.

He landed at Seattle in the Western Athletic Conference, but a torn ACL during the summer cost him his first season. As a redshirt freshman in 2016-17, he was named WAC Freshman of the Year, averaging 8.6 points and shooting 40.4% from 3. 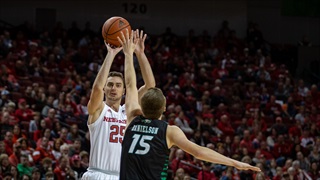 He had his best season as a sophomore, putting up 15.4 points and 5.1 rebounds while shooting 46.4% from 3. He was  a second-team All-WAC selection. Kavas got off to a great start his junior year but a midseason shin injury sidelined him for nearly six weeks and limited him after he returned to the court. He only played in 24 games but still shot 45.8% from 3.

Kavas graduated from Seattle and entered the transfer portal, hoping to test himself against a higher level of competition. He settled on Nebraska with Hoiberg’s system putting a premium on shooters.

Kavas’ career 44.7% from 3 at Settle didn’t translate, however. He appeared in 22 games overall and averaged just 14.5 minutes per game, shooting 33.8% from 3. He fell out of the rotation for three games in January, but once Hoiberg called his number again Kavas brought a spark. He played his best basketball in his last three healthy games, scoring 25 points in 48 minutes while shooting 8-of-16 from the field and 5-of-11 from 3.

It didn’t end the way he wanted, but Kavas said he is grateful for his time as a Husker.

Despite the various injuries and the lack of success and playing time this season, Kavas is at peace with his college career.

“Just the experience, to be here in the United States, to be able to get an education and also play basketball at a high level,” Kavas said. “That’s the reason I came to the United States. But also just overall, the team and individual success I’ve had in my four, five years I’ve been here, I’m pretty pleased with it.”

Kavas is looking at a six-to-eight-week recovery timeline, and after he’s back to full health he’ll begin looking for professional opportunities, wherever in the world that might take him.

But for now, the seniors will have their chance to stand in front of the Pinnacle Bank Arena crowd on Saturday and received recognition and gratitude for the time and effort they put into getting this program off the ground in year one under Hoiberg.

“The seniors, those guys mean a lot,” Hoiberg said. “I’m really happy for Haanif. It think he’s playing his best basketball of the season right now … He’s been the rock for this team as far as leadership. He’s taken pride, I think, in that role to try to show the younger guys the right way to work. When you come in, especially when you have one year left to play as a grad transfer, you’re worried about what is going to happen with your future and that’s human nature to do that, but Haanif has really taken pride in a leadership role and I think he’s helped our young guys along early in their careers.”

Cheatham said he’s looking forward to following the program and tracking its growth after he moves on. He has no doubts that Hoiberg will have success in Lincoln down the road, thanks in part to the foundation he and Kavas and the rest of this team have laid this season.

“I know I’ll be able to call any of the coaches here and just say ‘Man, I told you guys, I knew you were going to be this good,’” Cheatham said.

Hoiberg said after Nebraska’s loss to Ohio State on Thursday that he was hoping to give not only the seniors, but also the fans something to celebrate in the team’s last game at home. Northwestern is the only team below Nebraska in the Big Ten standings, but the Wildcats’ only conference win came against the Huskers, the first of Nebraska’s 13 consecutive losses.

The Huskers will look to dish out a little payback on Sunday. Tipoff is set for 3:15 p.m. CT on BTN.