Padding the Stats: Basketball is Back

Back in mid-March, I used this column space to write about COVID-19 taking basketball away from me. Now, four months later, I’m using it to share that the game I love is back in my life.

On Tuesday night, The Basketball Tournament (TBT) concluded in thrilling fashion as the Golden Eagles, a Marquette alumni team, took down Sideline Cancer 78-73 on ESPN. The 22-team, 11-day event went off with only a few small hitches. One player tested positive during the quarantine period in Columbus and his team had to head home without competing — making it a 21-team event — but all the other games went on as scheduled.

TBT featured an aggressive quarantining and testing process and the tournament was held in an enclosed bubble with strict rules. Larger professional leagues won’t be able to copy what TBT did completely, but it’s still a good sign for the future.

It was also a lot of fun to follow when I got the chance to tune in. The tournament featured a ton of really talented players including many recent and not-so-recent stars of college basketball — 38-year-old Travis Diener hit the game-winning shot in the Elam Ending of the championship game. I’m looking forward to next year’s TBT, and perhaps we’ll have a local tie (beyond Kimball native Mike Daum who starred for House of ‘Paign this year) if Omaha’s Finest is able to qualify for the (hopefully) normal-sized field.

Barring any setbacks, the NBA will start up again in a couple of weeks, and the WNBA is preparing for its upcoming start as well. TBT was a great way to reintroduce basketball on TV. 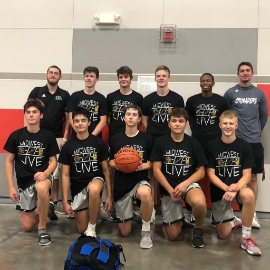 I’m coaching a 15U team — high school sophomores-to-be — at Omaha Sports Academy and we went 5-0, winning our pool and championship game. After a few weeks of practice, I still had no clue what to expect from my team, and they blew me away. It was so much fun being around a team again, particularly one that works as hard and plays together as well as mine did this weekend. I’m really excited about this summer. The 17U team I help coach with my friend also went 5-0 and won their championship.

As much fun as it was spending my weekend like I would in a normal July, it was impossible to escape the reality of what was happening outside the gym walls, though that’s not a bad thing. The tournament required everyone to wear a mask to get in the doors, and they did forehead temperature checks as well. Post-game handshakes were banned and team huddles after the game were supposed to take place outside. Players and their families were asked to leave after their game and not to enter the building more than 20 minutes before tipoff.

On Friday night, almost everybody inside wore a mask. As the tournament went on, though, people got more and more lax with the rules and they weren’t strictly enforced either. The percentage of those wearing a mask in the stands continued to decrease, and it is impossible to truly social distance at an indoor event of this size. Heck, the the court was absolutely packed for the OSA Adidas 17U team’s showcase game against Team Buddy Buckets on Saturday evening. Hunter Sallis draws a crowd wherever he plays around these parts, and Saturday was no different.

Personally, I wasn’t as good with my own mask as I should have been. Coaches had to wear their masks to get in but weren’t required to wear them on the bench. I coached my team in five games and was on the bench with other OSA teams in 10 more games throughout the weekend, all without a mask. I wore my mask when I was in the stands watching other games but I didn’t bother putting it on when I was moving from court to court or speaking with other coaches between games.

High school summer leagues and other events have started back up the last couple of weeks as well, and I’ve been going to those too. Mask usage and social distancing have been all over the map at all of the events.

I believe summer basketball is important for kids and while I’m still very nervous (the pandemic is still very much going on even if Nebraska hasn’t been hit as hard as other states) I’m glad that it’s happening. I hope we’re able to play all the way through the summer as we’re scheduled to do right now and I hope the NBA restart and the WNBA season are as successful as TBT was. But the only way any that is going to happen is if people take COVID-19 seriously and act responsibly.