Oh, what we would give for the annual tradition of crumpling up another busted bracket in the weeks ahead. It would be great to have the freedom to be wrong about college basketball teams right now, but this, of course, is a time to be right about something much bigger than sports.

I hope that feeling comes through in the March issue of Hail Varsity. A week ago, it was an entirely different magazine, different cover, different everything. Of course, the magazine making its way to you now had to be different. It's a different world. Hopefully just temporarily.

I'm proud of the work our team put into this issue. As I was on the phone with design director Quentin Lueninghoener late last week and we were realizing that the magazine we had nearly finished was now irrelevant, deputy editor Erin Sorensen and recruiting analyst Greg Smith were at Nebraska's pro day, one of the last Husker events for a while. When I spoke with Erin after pro day was finished, I didn't yet know what new stories were going in the magazine, just that we needed new ones.

"I have something," Erin said. It's the main feature you'll read in this issue.

MORE: An Annoucement Regarding Our Publishing Schedule

We knew we needed to include the news to the best of our ability, which is always a bit of a struggle for magazines. The stories near the front of the book were written and rewritten a handful of times as that news kept changing. 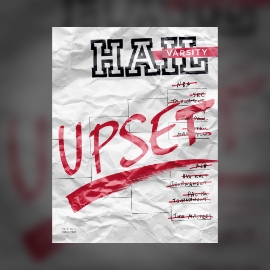 We knew we needed to feature some of the last images of Husker athletes competing this spring.

We knew we needed to capture some of the absolute upheaval of the sports world at large between March 10 and March 12. We knew that probably extended to the cover. Settling on a headline involved forwarding and discarding many options. It's hard to boil things down to one word. Most of them worked in one sense, but not in another. In the end, we leaned on the English language. We needed a noun and a verb, something that covered a lot of ground.

A March without a bracket? The ultimate upset. How we’re feeling on a lot of fronts? Upset.

Hopefully this issue marks a moment in our history and adds something to the discussion. Hopefully it provides some entertainment, some information, some solace, whatever you need when you need it.

Thanks for reading, now more than ever.