At the point Nebraska entered the Big Ten in 2011, it was basically as good as Alabama. On defense, that is.

The 2009 Huskers, behind Ndamukong Suh and a shiver of sharks in the secondary, ranked second to the Tide (14-0, national champs) in defensive SP+. The 2010 Nebraska defense––minus Suh, still with the sharks––ranked eighth in defensive SP+, again one spot behind an Alabama defense coordinated by Kirby Smart. It was high-level stuff from the Huskers and that it was happening in the Big 12––by then college football's O.K. Corral thanks to early spread innovation––only made it more striking.

It certainly didn't seem like moving to the Big Ten would make things more difficult for the Huskers defensively, but it sure did. Earlier this week I selected the top five Nebraska offensive performances since joining the league in 2011. It was based on a handful of statistical factors with an emphasis on efficiency (as measured by success rate) as that is really the first thing I look at when trying to understand how well a team played.

That process was much more difficult on defense. The Huskers just don't have a lot of good, complete performances against teams that matter, particularly of late. Four of the five best defensive games Nebraska has played since joining the Big Ten, in my estimation, occurred in the Huskers' first three seasons in the league.

Candidates for this top five were so few that I almost included the 2013 Capital One Bowl, a game in which the Huskers lost and gave up 45 points. Felt like I had a decent argument, too, given that this was against Georgia, the fifth-best offense in the country that year, and Nebraska kept the Bulldogs below a 30% success rate. (Problem was, Georgia scored touchdowns on plays of 29, 75, 24, 49, 24 and 87 yards. That game was great and might be due for a rewatch.)

Anyway, here are what I would consider Nebraska's five best defensive performances of the Big Ten era.

Best remembered for Ameer Abdullah's game-winning plunge into the end zone, this game was really defined by defense both ways. Nebraska held a solid Michigan offense––led by QB Devin Gardner, WR Jeremy Gallon and TE Devin Funchess––to 175 total yards and a 33.9% success rate. The Wolverines would lose three of their remaining four games that season, but did put up 41 points on Ohio State at the end. The Blackshirts stopped 51.7% of Michigan's rush attempts at or behind the line of scrimmage, which remains the best Nebraska stuff rate since the start of the 2011 season. 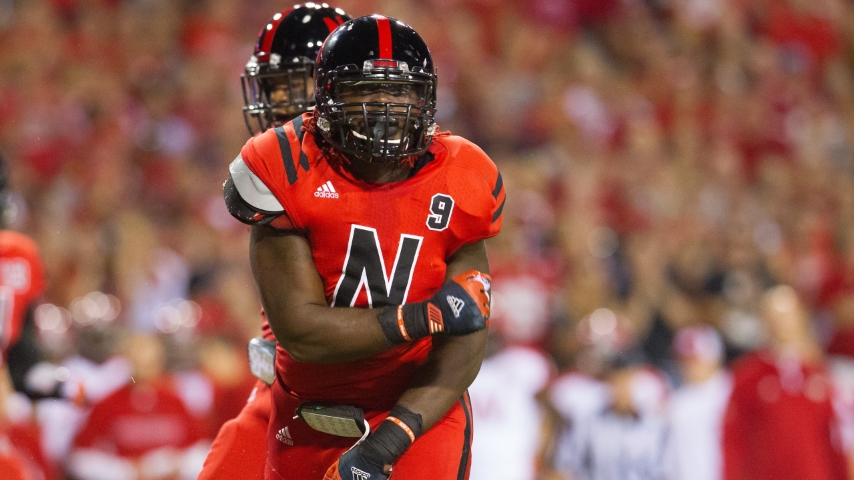 This wasn't a vintage Wisconsin team, though the Huskers would make it look that way in the Big Ten Championship Game. But before that, on the last Saturday in September, the Blackshirts kept the Badgers in check at Memorial Stadium in The Scrabble Game. The Huskers held a backfield that contained Montee Ball (1,830 yards in 2012), James White (806 yards) and Melvin Gordon (621 yards) to 56 yards rushing on 41 carries. Wisconsin's rushing success rate in the game was just 22.9%, 10th-best for the Huskers since 2011, and the game was finally won on a forced fumble. On the first Saturday in December of that year, Wisconsin made it look like this defensive performance never happened.

Here it is, the most recent game to make the top five and it was four seasons ago. You may remember this Hawkeye bunch as the "It's time to talk to your children about Iowa in the Playoff" team. It wasn't great offensively, but it did many Iowa things well like having six of tight end George Kittle's 20 receptions on the year result in touchdowns. And it just kept winning, as it did on this day, forcing Mike Riley's first team to back-door its way into a bowl game. The Hawkeyes are typically an offense that thrives on efficiency and the Blackshirts did a solid job taking that away. Iowa's success rate in this game was 25.6%, but two long third-quarter touchdown runs and four Tommy Armstrong interceptions were just too many game-swinging plays to give up. Take away one or two of those and Nebraska did enough defensively to win.

Yep, back to 2012 again. This season was a wild ride. After beating Wisconsin and then getting trounced at Ohio State, Nebraska went on the road again to Northwestern. This was a better-than-average Wildcat offense, ranking 51st in offensive SP+. Running back Venric Mark would rush for 1,366 yards this season and QB Kain Colter was a problem for opposing defenses. In terms of overall success rate, this is Nebraska's best performance of the Big Ten era at 18.3%. It was just 7.7% on passing downs, meaning that Northwestern's only hope here was to stay on schedule and it was a struggle. The Huskers were down 28-16 with 8 minutes remaining, and a three-and-out between the Huskers' two fourth-quarter touchdowns may have been the key series in this game. Northwestern went on to finish 10-3 in 2012.

This was not the plodding Michigan State offense of a more-recent vintage. This Spartan group ranked 26th in offensive SP+ at the end of the year. It had Kirk Cousins at quarterback and Le'Veon Bell at running back. Wide receiver B.J. Cunningham was on his way to a 1,300-yard season but was held without a catch as the Blackshirts held Michigan State to a 19.3% success rate on passing plays. In terms of traditional, dominant defense––the kind that Bo Pelini's teams showed early in his tenure––this was really the last hurrah for that.

As the dates on this list indicate, cracks started to develop along the way. You could see some in 2012 (Ohio State, Wisconsin 2.0) and Nebraska is still trying to find a way to fix some of those.

Next up, I'll look at all of the offensive and defensive numbers side-by-side to come up with the best overall games the Huskers have played since joining the Big Ten.