The redshirt rule changed a few years back allowing players to appear in up to four games without costing them a season of eligibility has given young players a chance to see the field who we otherwise would have to wait a full year to see.

That includes Luke McCaffrey. I broke down his passing plays a few weeks back.

Johnson played in four games his season, though he only saw the ball in two of them. I’m going to focus on those two games. As a true freshman, Johnson ran the ball 21 times for 64 yards and one touchdown and caught one of his four targets for 12 yards.

The 5-foot-10, 180-pound back showed some flashes of the talent that drew Nebraska’s coaching staff to him.

Johnson made his debut in Week 3 against Northern Illinois, carrying the ball three times for 9 yards. I liked what I saw on his first carry in particular.

Johnson enterred the game in the fourth quarter with Nebraska leading 37-8 and Noah Vedral playing quarterback.

The first play ended up being a throwaway in Johnson’s direction, so it counts as a target for him even though it wasn’t catchable. The next two plays were passing completions to Darien Chase for 13 yards and Kurt Rafdal for 9.

On second and one, Vedral handed it off to Johnson looking towards the right side of the line. Johsnon saw that a Huskie was breaking through the line on that side unblocked, so he planeted his feet and cut it back to the left. 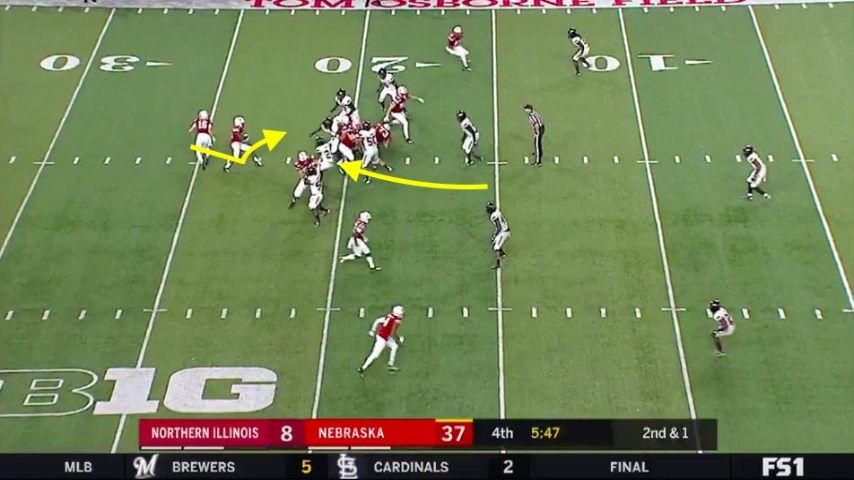 Johnson showed his burst, running right between two defenders to pick up the first down. 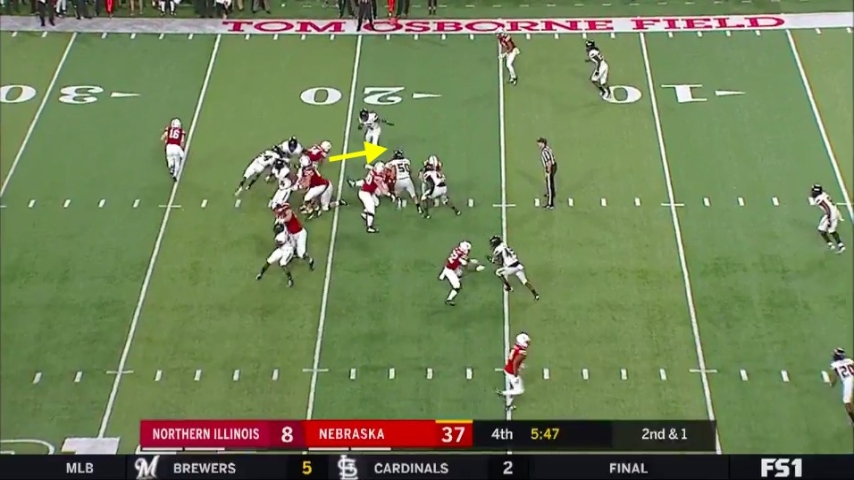 Johnson ran through another tackle attempt before the fourth defender finally got his hands on him and took him down. Johnson still fell forward to the 16-yard line. 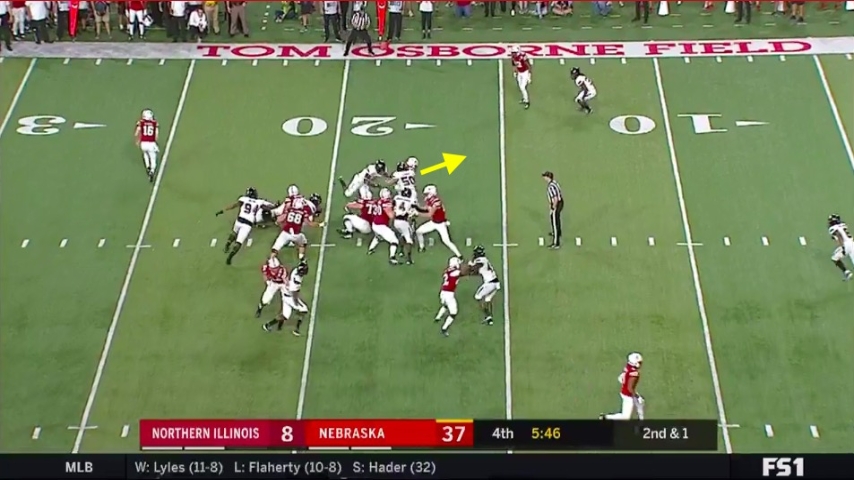 The 4-yard gain showed Johnson’s vision to see the free defender, quick feet on the change of direction and acceleration to avoid the first two tacklers.

The Huskers went right back to him on the next play on first and 10. He took the handoff and cut left. 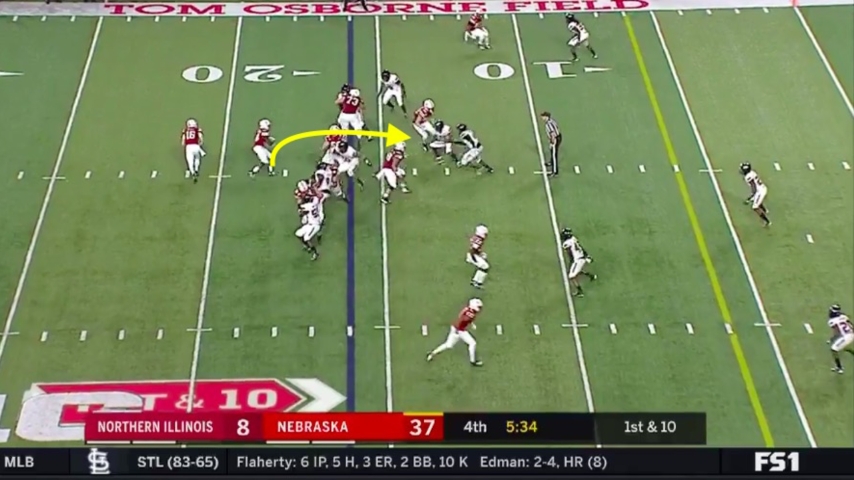 Johnson did a good job of avoiding the first rusher (see the guy diving at him below) but ran right into another. 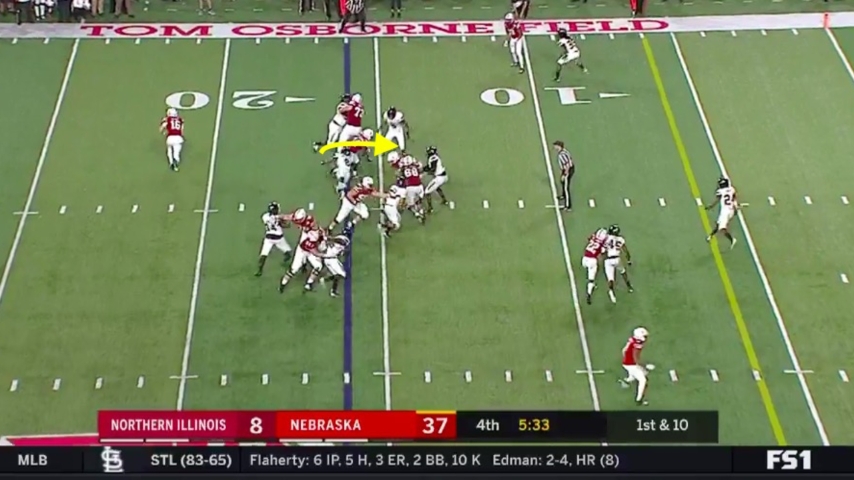 He kept his legs churning, however, and Will Farniok gave him a little help with a push from behind. 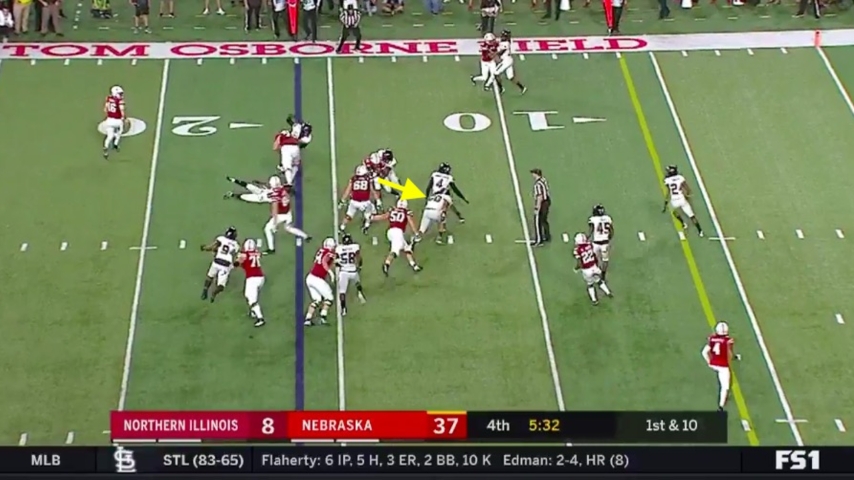 Farniok’s push got Johnson and extra 2 yards as he fell forward for a 5-yard gain.

Once again, he showed some good footwork and acceleration to make the first guy miss, and he showed some toughness and strength too as he kept himself up until Farniok could get there.

His third carry had no chance; on first and goal he ran it up the middle and got hit before he got to the line for no gain.

Johnson didn’t see the ball again until the Maryland game in late November. He ran the ball 18 times for 55 yards and his first career touchdown and made his first reception for 12 yards as Nebraska smashed the Terrapins.

He checked in during the first quarter with Nebraska leading 7-0, so it’s clear that Nebraska worked him into the game plan for that game — it wasn’t just garbage time. His catch came on a simple play — he ran a route into the flat and nobody went with him. Adrian Martinez put the ball on the money and Johnson ran up the sideline untouched until a defender lit him up after a gain of 12.

On the following drive with Nebraska up 14-0, Nebraska ran him on a sweep to the left and he used his speed to beat the outside linebacker to the edge and turned the corner for an 8-yard pick-up. A handful of plays later, Nebraska tried to run a quick pass play to him but Martinez threw the ball to far ahead of him for an incompletion.

Fast forward to the second quarter with Nebraska leading 24-0. On third and eight, Nebraska tried to get him involved in the passing game again. Nebraska sent a fw receivers downfield but Martinez didn’t see any opions he liked so he checked it down to Johnson running a crossing route underneath. There was one defender closing in on him but had Johnson caught the ball cleanly he might have had an opportunity to make im miss and get up field. Instead, the ball went through his hands for an incompletion. 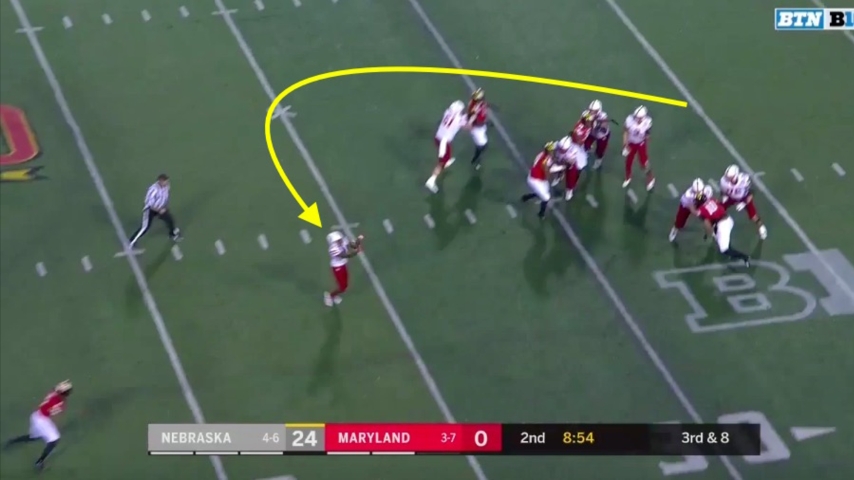 So Johnson’s four targets are an uncatchable throwaway, an uncontested catch in the flat, a throw beyond is reach and a drop. It’s hard to know based on such a small sample size what kind of a receiving threat Johnson can be. I will mention that he had one really nice rep in pass protection early in the third quarter where he chipped a pass rusher and gave Martinez time to get the ball out for a 12-yard completion to Kade Warner.

The first play of that early third-quarter drive showed the good and the bad of Johnson as a true freshman. Nebraska ran an option and Martinez quickly pitched it out to to the running back.

Johnson caught the ball and started angling towards the sideline while a defender fought off Austin Allen’s block. 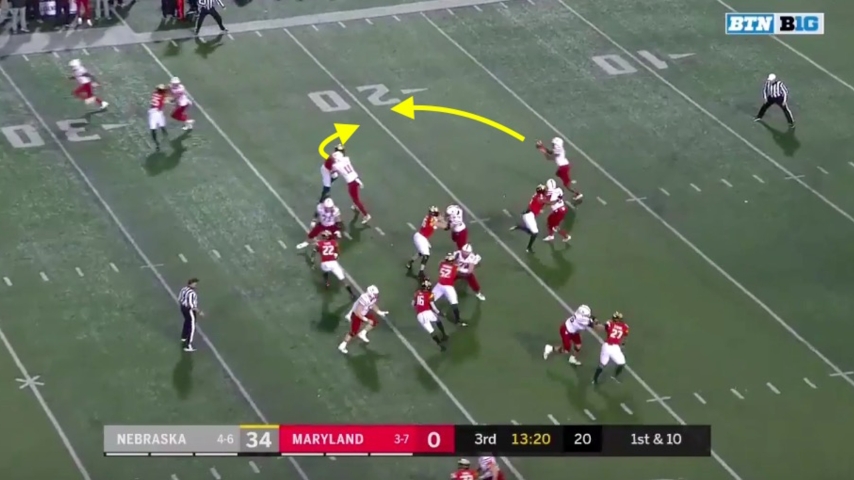 Johnson planted his foot again and cut the ball back inside and up field, making the defender lose his footing. 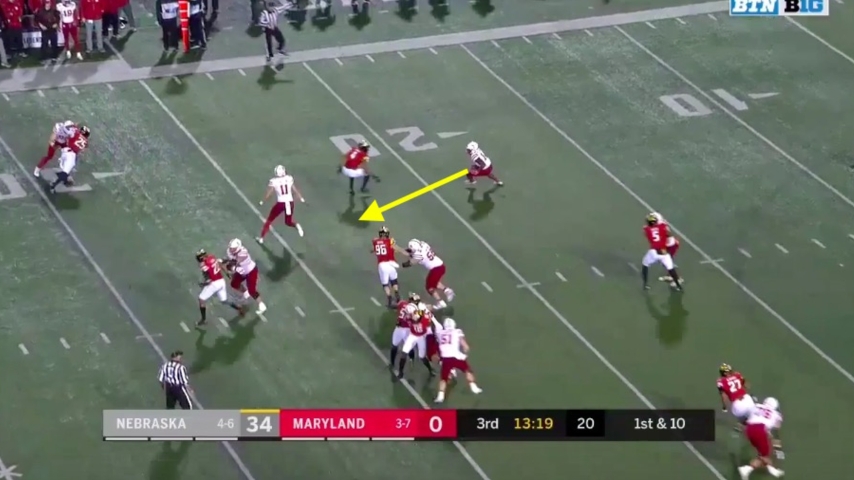 As he was falling down, the defender lunged at Johnson’s feet in desperation. 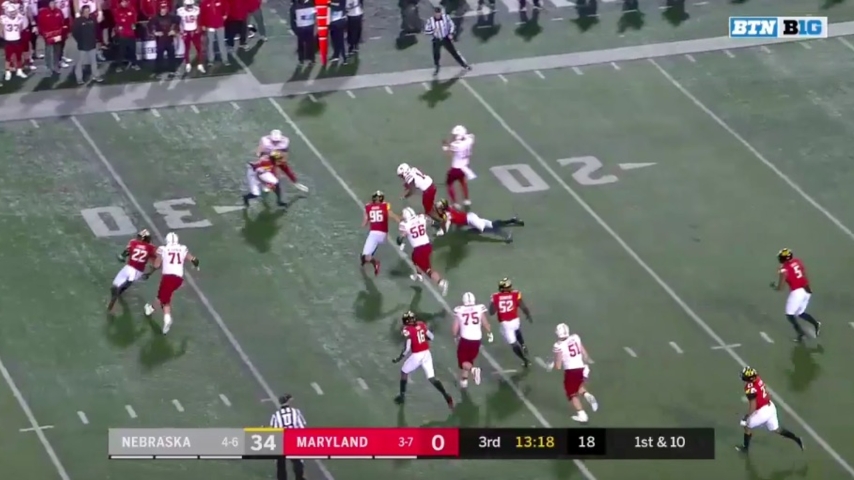 Unfortunately, Johnson wasn’t strong enough to run through the shoe-string tackle, and a run that got off to a pretty promising start ended after a gain of just 4.

If there’s a negative trend I saw in Johnson’s film, it is that he went down a bit too easily too often, especially with defenders going for arm tackles from the side or behind around his knees and ankles.

Of his 21 carries, 16 went for 4 yards or less (thus the 3.05 yards-per-carry average). A good portion of those were on the blocking, but Johnson also left a fair number of yards on the field with how easily he went down.

That being said, Johnson did show again later in the third quarter that he’s capable of running with some toughness. On third and 5, he lined up out wide but then motioned into the backfield. He took the handoff and ran into the left. Angling away from two defenders closing in while avoiding the defenders engaged with his blockers. 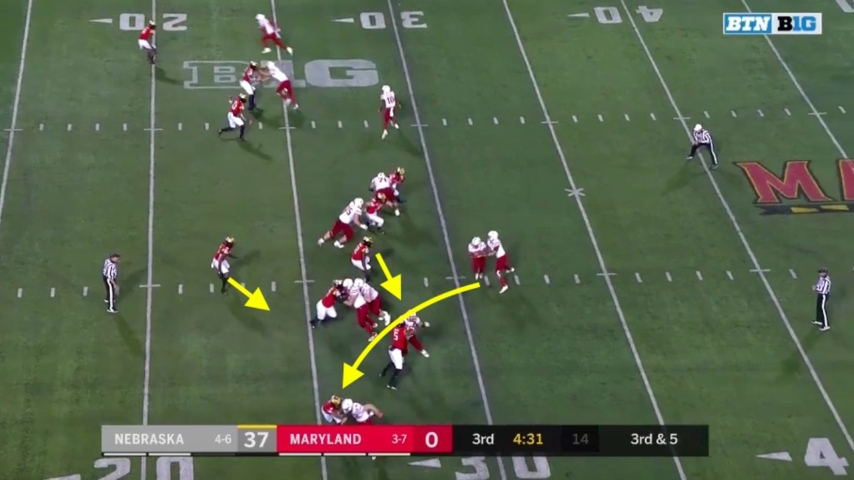 A Terp caught him from behind and tried another arm tackle around his legs, but he managed to keep his balance and spun around. 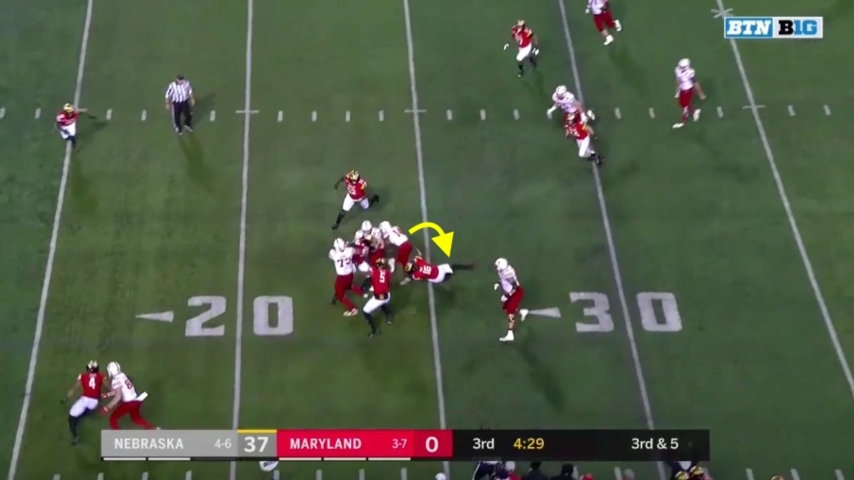 Johnson put his hand on the turf to hold himself up, showing some terrific balance, but unfortunately there were two more defenders there to tackle him almost immediately. 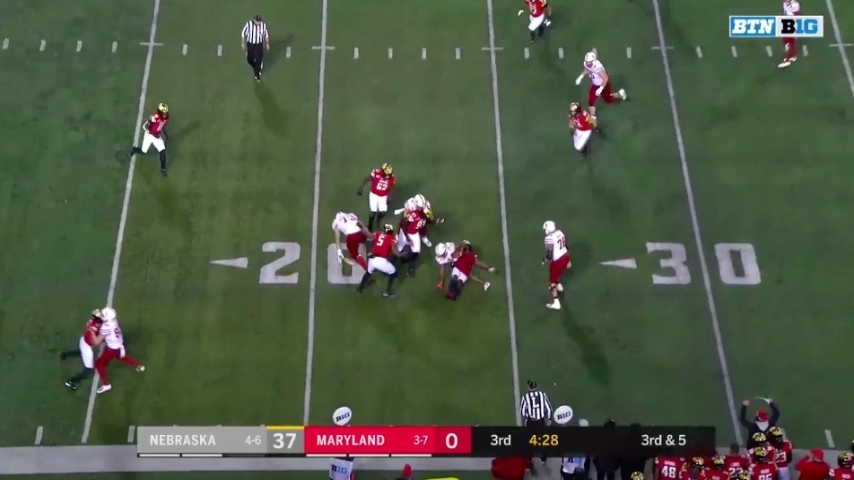 Still, Johnson got 4 yards on the play and it took multiple efforts to get him down. The gain made fourth down manageable, and Nebraska gave the ball back to Johnson who made a defender miss and picked up 3 when the Huskers only needed 1.

In total, I watched 45 snaps of Johnson, so not even a full game’s worth. Still, I saw the flashes of why Nebraska liked him coming out of Bergen Catholic in New Jersey. The thing I liked most is he has good feet with the ability to cut on a dime and make defenders miss.

Ultimately, I don’t think he was ready to play as a true freshman and strength and conditioning will be he key to being him there. More work with Zach Duval will lead to Johnson running through the arm tackles that took him down so often in 2019, and I think we’ll see a bit more of the home run ability he was known for in high school (he was a standout sprinter on the Bergen track team) as he continues to adjust to the collegiate level of play and strengthens his legs and core.

Johnson could have made big strides this spring as he seeks to earn a role in the backfield behind veteran Dedrick Mills heading into 2020. Nebraska’s incoming freshman running backs weren’t set to arrive until the summer, which means it would have been just Mills, Johnson and Ronald Thompkins as scholarship backs on campus this spring. Now, Johnson will have to make up for lost time whenever football resumes if he wants to earn the back-up job or even push to take carries away from Mills.