With all three starters off to the NFL, defensive line coach Tony Tuioti has plenty of opportunity to offer the guys in his room in 2020. One of the lineman hoping to take advantage is sophomore Casey Rogers.

The 6-foot-4, 300-pound lineman from New York redshirted in 2018 while recovering from an injury. He played in four games in 2019, and although he didn’t record any stats he did put some good reps on tape.

Rogers played 34 snaps in 2019 with 32 of them coming at defensive end with a couple of nose tackle snaps tossed in.

Rogers made his Husker debut against Northern Illinois, logging nine snaps. He checked in with the Huskers leading 44-8 with four minutes remaining. He showed off some real power on a play later in the drive.

On first and 10, Rogers lined up at right defensive end. 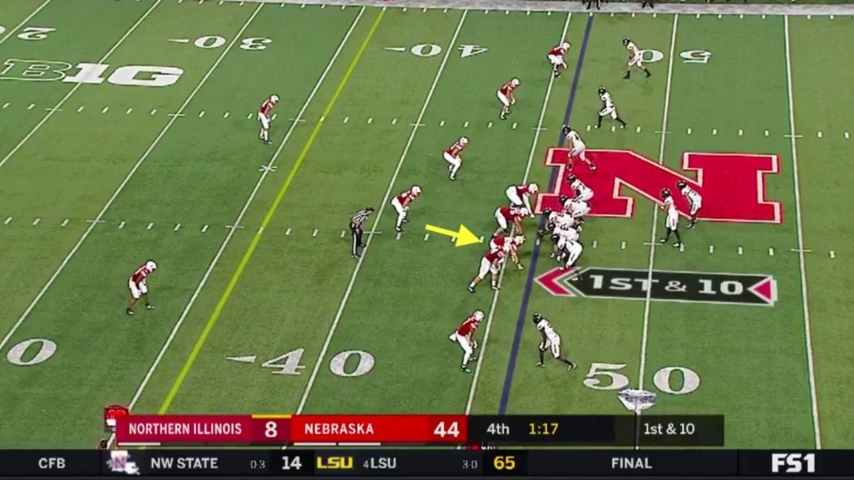 After the snap, Rogers made contact with the left guard at the line of scrimmage as the quarterback held the ball out for a read option play. 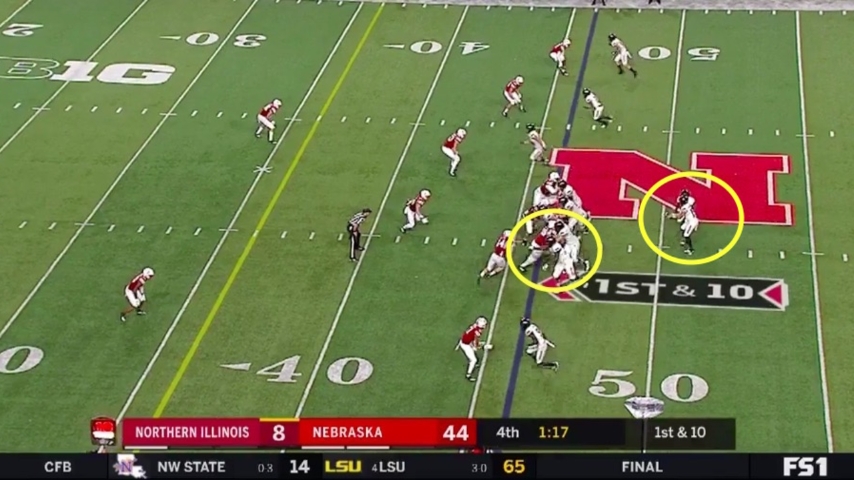 Rogers powered through the guard, knocking him back a few yards right into the path of the running back, blowing up that option. The quarterback saw what was happening and kept the ball himself, though, taking off the other direction. 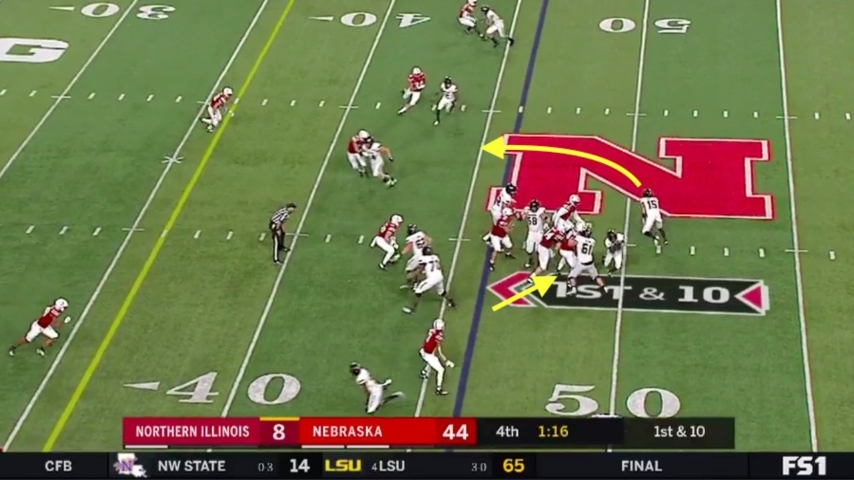 Another Husker defender rallied to the ball, though, tackling the quarterback after just 3 yards. 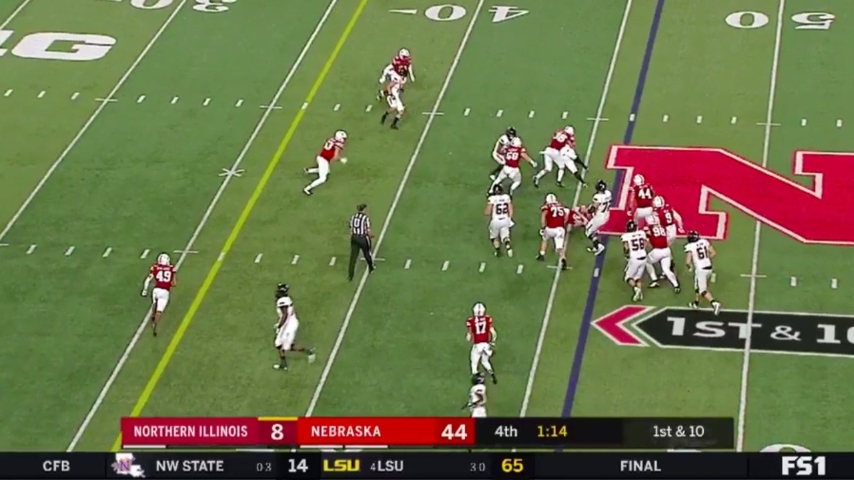 After two incomplete passes, the Huskies faced a fourth and 7. Rogers lined up on the right side again while the Huskies set up in a tight formation. 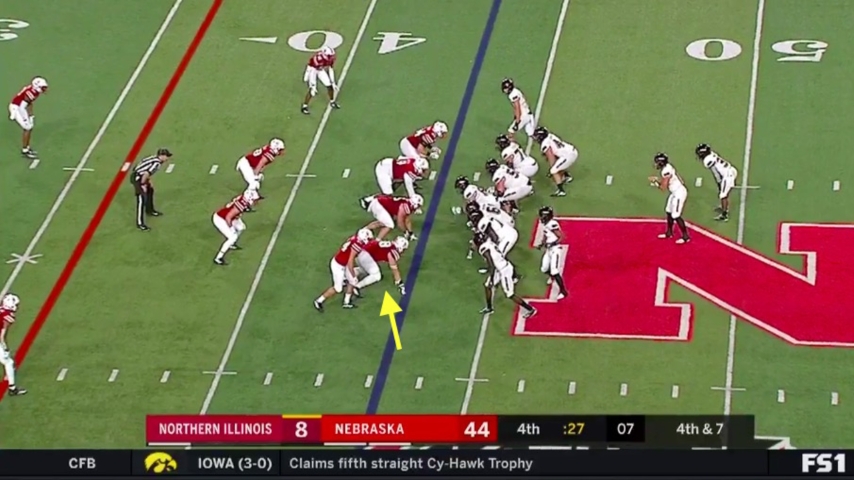 Rogers got a handful of chances to rush the passer in 2019, including this play. He didn’t record any sacks or quarterback hurries nor did he display any advanced pass-rush moves, but he did show off a combination of quickness and power that should serve him well. His go-to move is a speed rush, and he got a pretty good jump on the left tackle on this play. 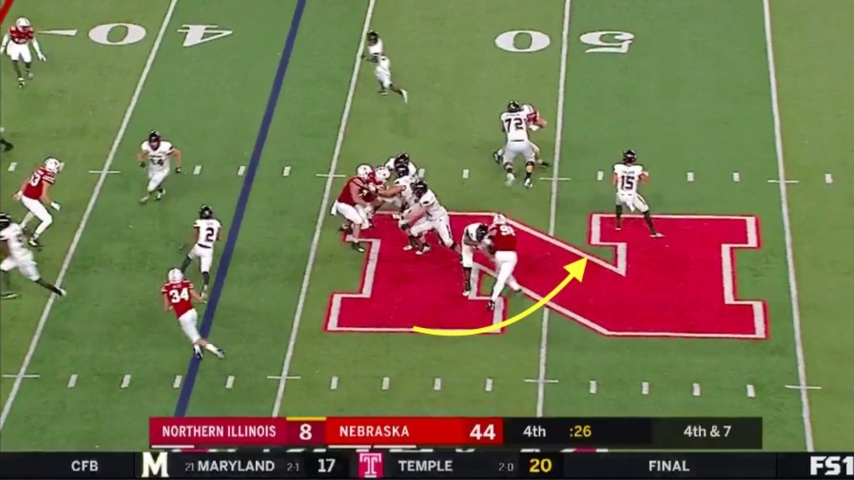 However, the tackle got just enough of Rogers to push him a little deeper than he probably wanted to go. Rogers over-ran the pocket and the quarterback stepped up and took off running to his left.

Rogers came within an arm’s length of his first sack, but the Husky signal-caller got away. 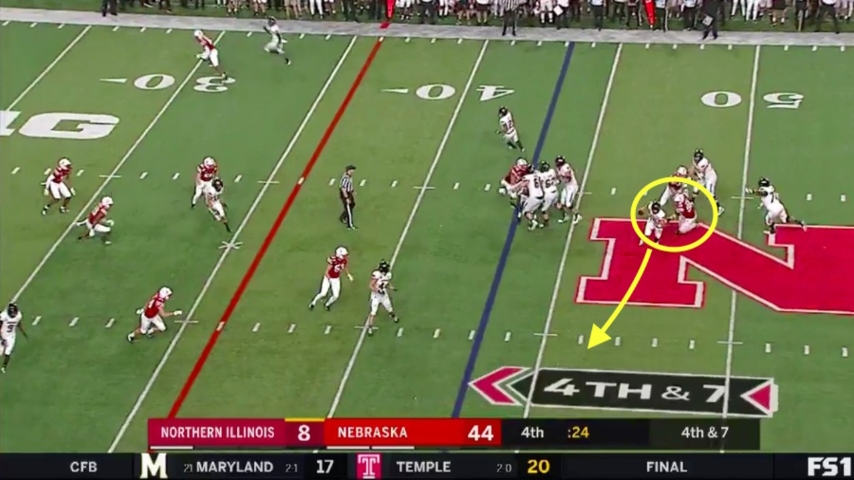 Rogers wasn’t fast enough to chase him down, but he kept up his pursuit while linebacker Joseph Johnson joined the party. 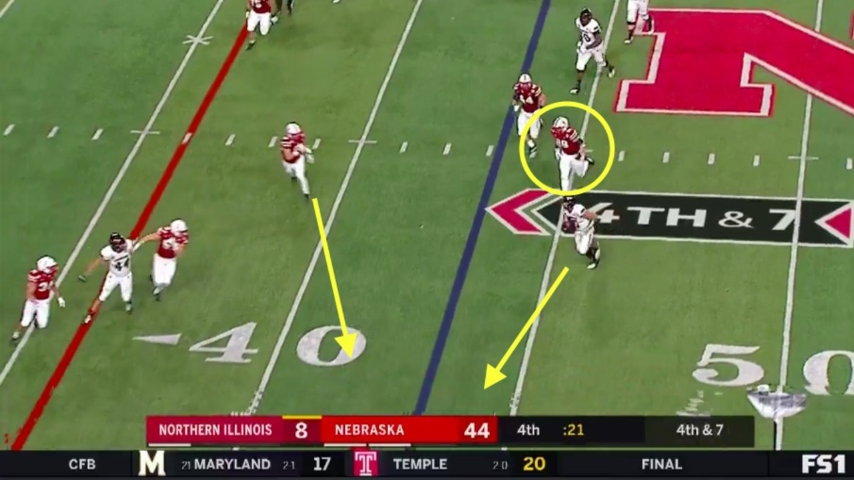 Johnson forced him out of bounds after a gain of just 1, creating a turnover on downs. 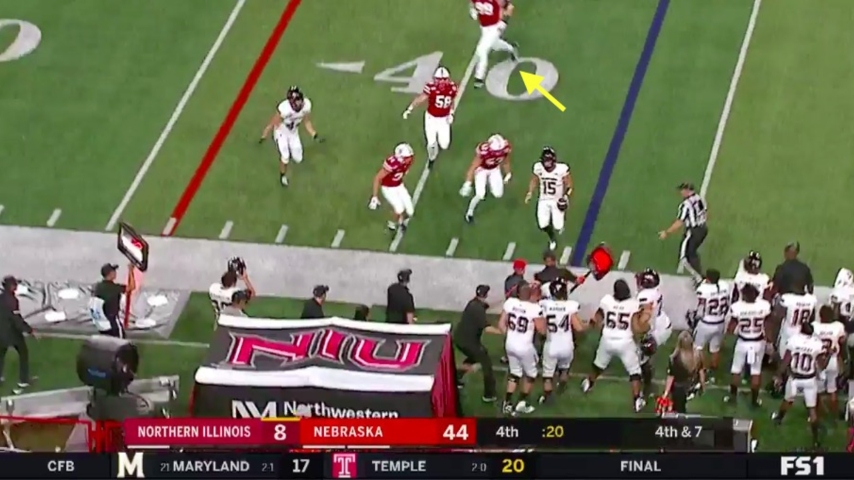 Rogers got another chance to see the field a few weeks later against Northwestern, though instead of garbage-time reps the coaches gave him his first snaps in a competitive game.

Rogers’ first snap came late in the second with Nebraska leading 10-3. He checked in at nose tackle on third and 10 as the Huskers wanted to get three pass-rushers on the field. Rogers got partially double-teamed but still got a little bit of push as a quick pass by the Wildcats fell incomplete.

He got nearly a full series (six plays) early in the third quarter.

Rogers checked in at left defensive end on first and 10. 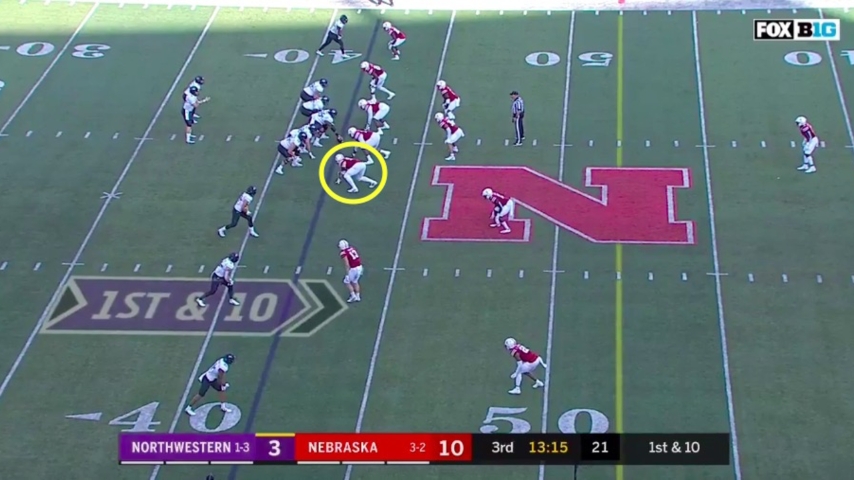 Northwestern left Rogers unblocked and ran a zone read. Rogers held his ground tight to the line instead of instantly chasing after the running back, so the quarterback let Drake Anderson take the ball. 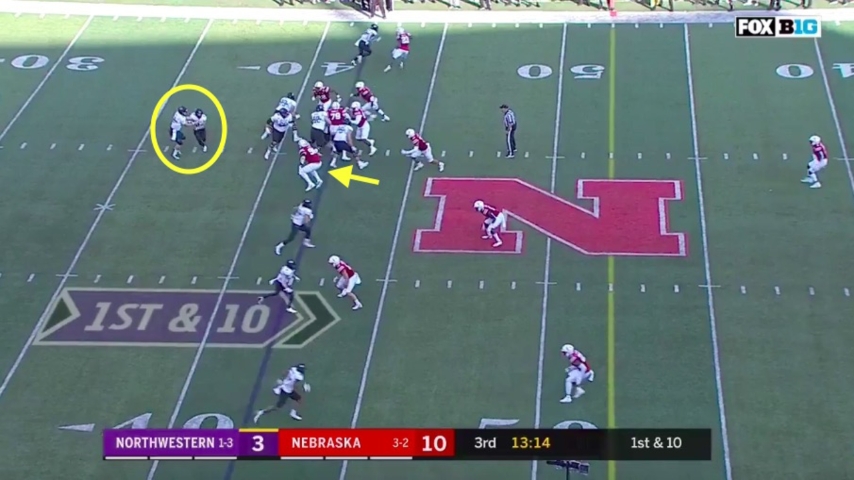 Anderson tried to bounce it outside as Rogers pursued him and Collin Miller rallied to the ball as well. 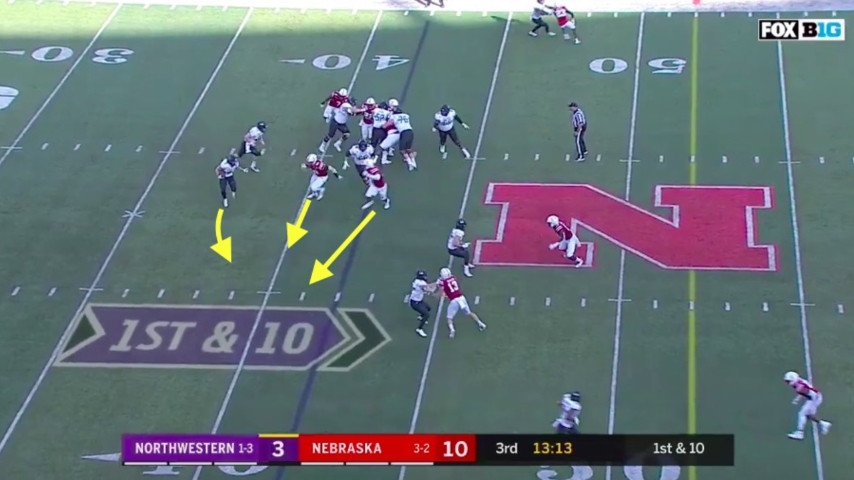 However, Anderson took advantage off Rogers’ momentum, stopping on a dive and cutting it back inside. Rogers wasn’t able to change directions as quickly (I mean, he does weigh 300 pounds). 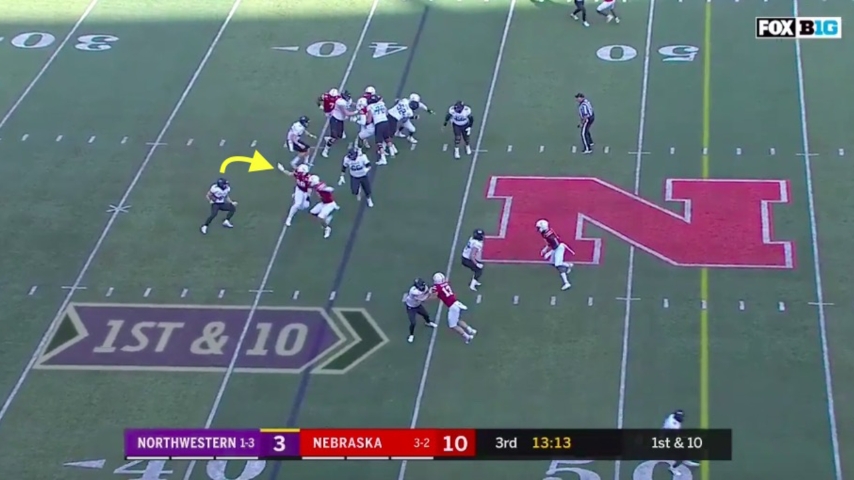 Anderson got a little help as an offensive lineman gave Rogers a slight push in the back, opening a giant hole right up the middle. 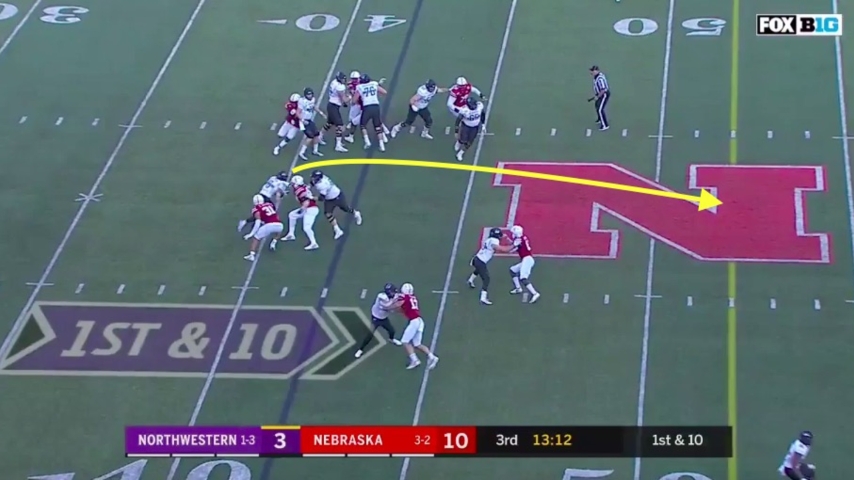 Anderson picked up 12 yards before the Huskers managed to take him down.

I don’t know exactly what Rogers’s responsibility was on this play. I’d say he did a good job of forcing the give and then stringing out the play, but then he slightly over-pursued considering Miller was there as well, opening up the cut-back. So some good, some bad on this one.

Rogers got five more snaps before checking out for good on first and goal at the 1-yard line.

Rogers had to wait a few more games before his next opportunity. He played nine snaps split between two series in Nebraska’s loss to Wisconsin. He wasn’t directly involved in the action very much at ll, though, and there were a couple pretty bad reps mixed in there.

Rogers’s last drive lasted just two snaps. He checked in at right defensive end with the Huskers trailing 27-14 in the third quarter. Wisconsin started he play with a jet motion with a receiver going left to right and the back cutting it straight up behind the left guard, who washed Rogers out of the play. On the first play, the jet motion got the ball and looped around the right side for a 9-yard gain.

Wisconsin basically ran the same play on the next snap, though this time the running back — Jonathan Taylor — got the ball. 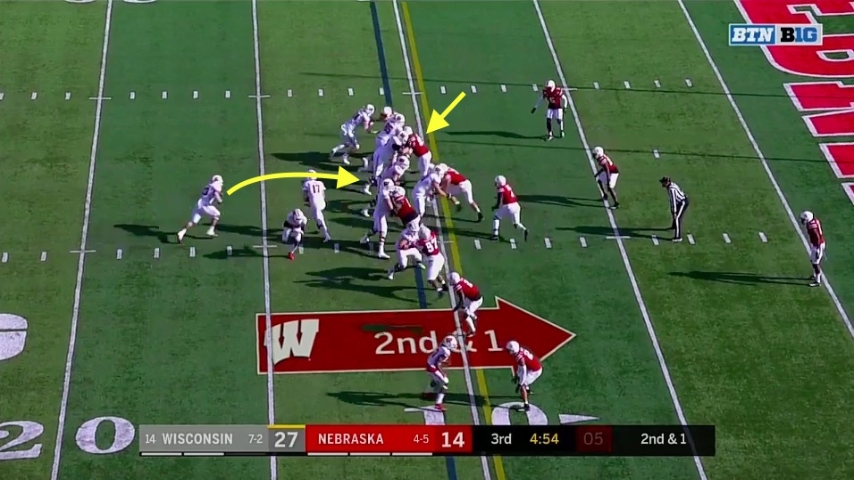 And got moved out of the way before Taylor reached the line of scrimmage.

He wasn’t the only Husker that got cleared out, but the run did start through his gap. Taylor cut it back towards the middle and sprinted for the end zone. A couple of defenders met him at the 2-yard line, but he took the hit, spun around and kept going into the end zone.

Wisconsin had by far the best offensive line Rogers faced as a redshirt freshman, and this game showed why he wasn’t yet part of the every-game rotation up front.

Rogers had a little more luck the following week against Maryland. He saw nine more snaps including a good rep on a fourth down play.

Rogers played one series in the third quarter with Nebraska leading 44-0. He played left defensive end for the first three plays then slid inside on fourth and 4.

On the snap, quarterback Josh Johnson dropped back to survey the field while Rogers attacked the right guard without gaining any ground. From there, he bounced off the guard and looped outside around left defensive end Ben Stille to rush from the edge. 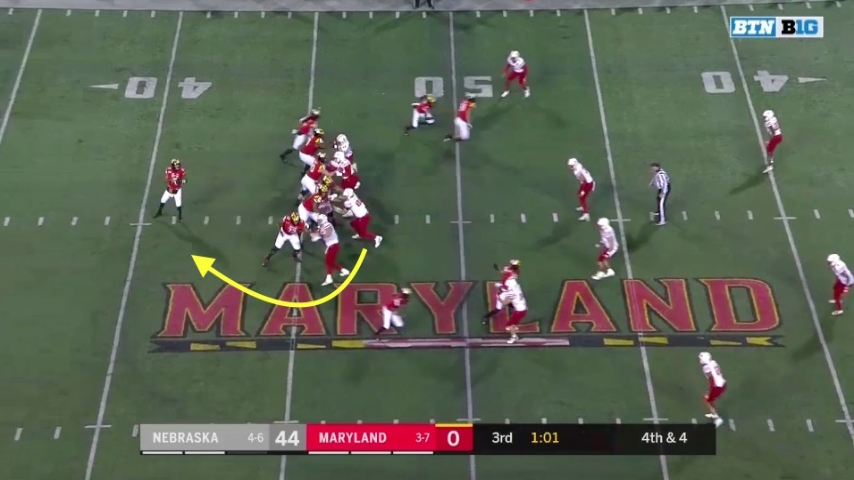 With Stille eating up linemen, the looping maneuver gave Rogers a clear path to the pocket. However, once again, he over-pursued just a bit too much, slipping as he tried to turn the corner and reach Johnson. Still, Rogers did flush Johnson out of the pocket. 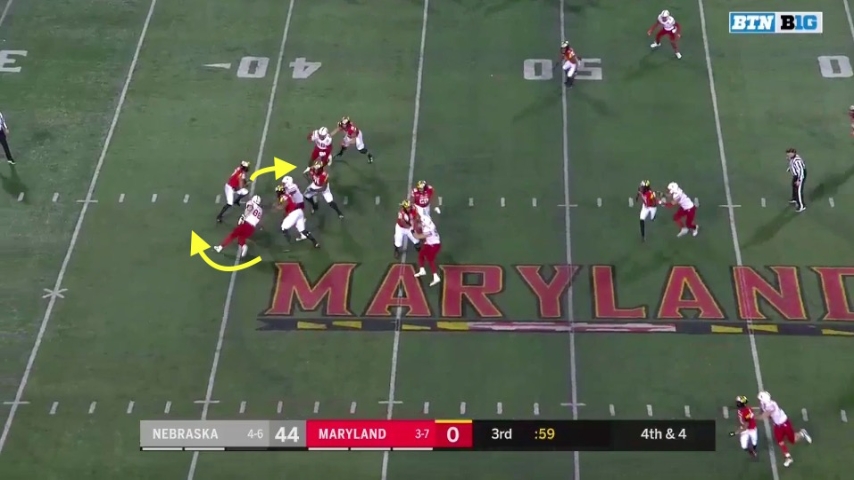 The Terrapin signal-caller tried to escape up the middle but the other defensive end, Carlos Davis, was there to take him down for the sack. 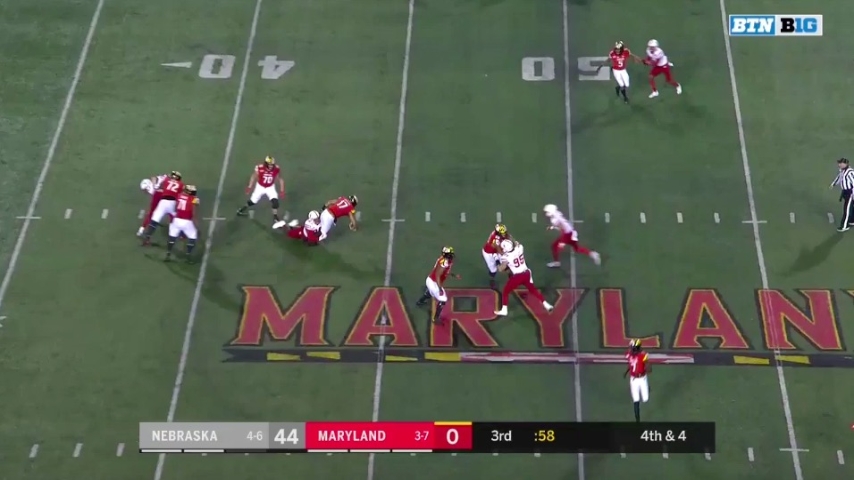 Rogers doesn’t get a sack for the play, but he should at least get an assist.

Rogers didn’t consistently excel in any one area in his 34 snaps in 2019, but he showed at least a little bit in a lot of areas. He showed enough power to move linemen, good enough hands to shed blocks and good enough get-off at the snap to get past blockers. Another thing that really stood out was his motor — he ran to the ball on nearly every play, whether he was directly involved in the play or not.

At the start of the spring, Tuioti rattled off six names he was comfortable putting in a game and Rogers was among them. Expect to see a lot more of him in 2020.