The 2020 Hail Varsity Football Yearbook hits mailboxes and newsstands very soon. In anticipation, we’re sharing stories that hit the cutting room floor from our main features. One of them focused on Greg Austin’s new role.

Late in the first quarter of Nebraska’s 31-27 loss to Purdue, nose tackle Darrion Daniels nearly won himself the Piesman Trophy, spinning his way into intercepting a shovel pass from Boilermaker quarterback Jack Plummer.

Daniels returned the ball to the 2-yard line, falling just short of total glory but setting up the Nebraska offense with as good of field position as it could hope for.

On first down, Adrian Martinez tried to pitch the ball forward to Wan’Dale Robinson and threw it behind him. On second down, Martinez dropped back to pass but an unblocked defender got to him before any receiver could get open. Martinez avoided the first rusher but got sacked by two others for a loss of 5.

On third-and-7, Martinez dropped back to pass again but couldn’t find any open receivers before scrambling and coming up a yard short. Nebraska settled for a field goal.

What did offensive line coach Greg Austin think of the series of play calls?

“The other time we were on the goal line at Purdue, we ran the ball in, right?” Austin told reporters back on the first day of spring ball. “So you tell me what I thought about it. We almost gave them the ball back on the same thing that they gave us the ball with, damn near. But still, I’m not making an excuse for that. Hell, we should have executed. You execute the plays that are called. Regardless if you like the play or not, execute the play.”

Austin won’t merely have to execute the plays he’s given moving forward. As the team’s newly-minted run game coordinator, he’ll have more of a say in what get’s called in the first place. 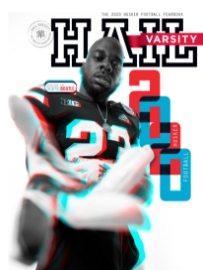 Paul Bellinger
The cover of the 2020 Hail Varsity Yearbook

The passion in Austin’s voice when he talked about his new role and the responsibility before him to rebuild the Pipeline stuck with me. As I went through the process of finding a topic for my yearbook feature, I kept coming back to that that conversation.

To gain further perspective on both the past and present of the Nebraska offensive line, I reached out to former Husker Matt Vrzal to talk Pipeline, Greg Austin and more. Vrzal, who is an assistant coach at Omaha Skutt in addition to being a Husker alumnus, is a fan of the promotion.

“It’s good to know they assessed that and are giving Coach Austin a voice because no matter what you’re doing, offensive linemen have to get into a rhythm,” Vrzal said. “You have to get five guys in a rhythm together and sometimes that means running the ball three times and punting for down the road. Later in the game, now you’re running the ball eight, nine, 10 times and you’re scoring. You’ve got to let guys get into a rhythm.

“That was a big offseason move and I’m super happy about that because I felt at times, I don’t know if he thought the offensive linemen’s voice was being heard. I thought that was a really cool thing. Now he’s the run game coordinator, so let’s get his input. He knows what his guys can do. Let’s get it going, get him involved and be able to control the line of scrimmage.”

It’s not about running the ball more for Austin — Nebraska ran it nearly 60% of the time last season. It’s about what run plays they call in specific situations.

“It’s not that I didn’t have a voice in the past, it’s more or less now the onus is on ‘G, what are we calling? Let’s go.’ And then I better be prepared to have that call on the end of my lips, ready to go.”

Austin said there are a million ways to run the ball, but his job now is to find which ways the Huskers can run the ball really well, to find their “bread-and-butter” runs.
Austin wasn’t part of the Pipeline; he came through the program through the Callahan era. Even so, Vrzal is happy to see a former Husker at the helm of the offensive line group.

“No. 1, I think Greg is a really good coach of the offensive line, so the fact that he’s an alumnus and this is his alma mater and my alma mater as well is just icing on the cake,” Vrzal said. “Here’s the thing that people struggle with: Greg Austin knows his vision and he knows what he wants his offensive line to look like. Him being hired as the offensive line coach, that’s 100% his right. Now, I’m probably one of the biggest chirpers about sometimes you just have to take football players. But Austin is really looking for what he wants his football players to look like. The fact that’s he’s an alumnus, he knows what Nebraska’s about, on top of being a great coach is just icing on the cake.”

For more on Austin and the pieces he has to work with in 2020, check out the full-length feature in the 2020 Hail Varsity Football Yearbook.