Other Personnel Decisions Nebraska Might Consider Before Fall Camp

This week we found out Nebraska had already kinda-sorta made up its mind when it comes to Matt Farniok’s place on the offensive line.

“I think missing spring ball is going to hurt us in some ways. Guys like Bryce Benhart, who we’re counting on to be a player for us this year, and there’s other guys like that but just picking out one name, losing out on those reps certainly isn’t ideal, those would have been valuable reps for him,” Frost said. “We’ve also had to kind of fast-track some of those decisions we might have had time to examine a little closer in the spring.

“Through talking during this time, I think we’re probably going to start (Farniok) out at right guard, just expecting there to be a younger player at right tackle potentially.”

The senior-to-be in Farniok has started 24 straight games at right tackle. But when the 6-foot-9 Bryce Benhart joined the roster ahead of the 2019 season it seemed to start a clock on Farniok’s time left at the position.

In a perfect world for head coach Scott Frost and line coach Greg Austin and the Huskers, Farniok is an All-Conference lineman who stays at right tackle through his senior season, affording Benhart two years in Zach Duval’s weight training program to get ready. Someday Nebraska’s going to get there, a situation where Austin envisions no gaps in development; a senior departs—hopefully for the NFL—and is replaced by a guy who’s been in the program and matured.

But Nebraska is in nowhere near a perfect situation. For a while, NU believed Farniok would best serve as an interior lineman. It just didn’t have the replacement pieces needed to make that move. Benhart, after a redshirt first year, provides the first real opportunity NU has had to test their Farniok hypothesis. The Huskers’ line, though it returns all five starters from 2019, is in a state of flux as we barrel toward 2020 football.

Fifteen spring practices would have been crucial for Benhart’s development, in terms of physically battling a top-line front seven day in and day out but also in terms of understanding the calls and checks made on the line and being able to apply that understanding in real-time.

And yet without those practices, it doesn’t sound like Nebraska is anticipating sidelining Benhart, but rather giving him a little extra help than originally planned. Farniok began spring ball on the other side of the line, next to fellow senior tackle Brenden Jaimes at left guard.

At right guard instead, Farniok can kick back out to right tackle more easily if need be and he can be a soundboard for Benhart to bounce questions, comments, or concerns off of.

It’s a decision that makes a lot of sense, whether it sticks on a permanent basis or not

It signals Nebraska still believes Benhart is ready. Or, at the very least, ready enough to begin fall camp as the guy and earn the spot outright. He’ll battle with the likes of sixth-year senior Christian Gaylord and redshirt freshman Brant Banks.

It signals, too, that left guard is now very much up for grabs. (But more on that in a minute.)

The plurality of Frost’s “fast-track” comment and the left guard situation getting a little fuzzier got me thinking: what other personnel decisions did NU have to make this offseason that were going to be seriously contested in spring?

Here are three others to consider: 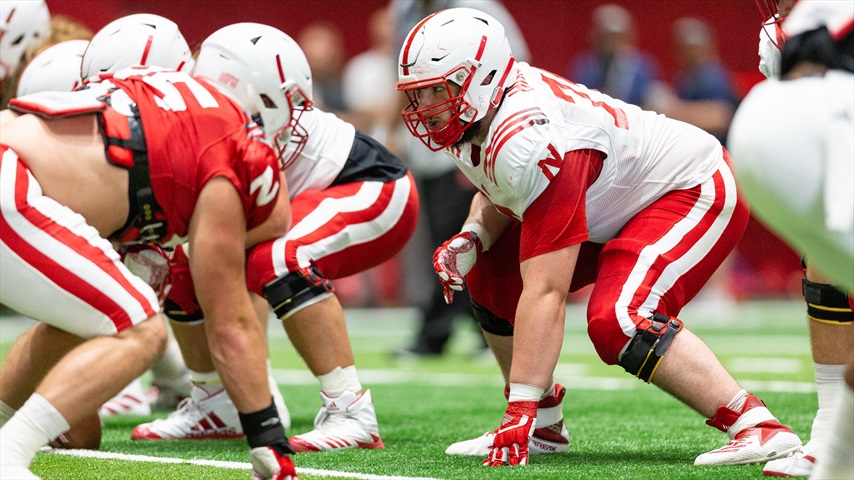 With Farniok at right guard, two returning starters, junior Trent Hixson and senior Boe Wilson, will fight for the other spot with names like Broc Bando (junior), Ethan Piper (redshirt freshman), and others.

Though that’s not technically any different from what would have resulted with Farniok at left guard, it makes me wonder about Wilson’s status.

NU put Hixson on scholarship last season after he won the left spot convincingly. He had moments throughout the year where he showed real promise.

But no one on the offensive line was consistently excellent (NU was 60th in yards per carry and 102nd in sack rate) and with Farniok going to left guard, the initial thought was he would just take Hixson’s spot and Wilson would stay on the other side and Nebraska would use four experienced linemen to help hold up the newbie.

But if Farniok taking Wilson’s spot and not Hixson’s, does that still mean Wilson can be penciled in as the other starter? Is it safe to assume he’s going to also change positions and be given the job?

I don’t think Austin is into giving anything to anyone.

For that reason, I also wouldn’t have thought in the spring we’d be able to rule out a name like Piper cracking the two-deep. Nebraska moved the Norfolk, Nebraska, native from the defensive side of the ball to offense after he got on campus last year. If he was going to sit behind multiple guys for multiple years (Turner Corcoran is coming down the pipeline) on the o-line while the d-line was going to immediately have to replace all three starters, I don’t know that Nebraska would have made the move.

Austin regularly says the best five guys will play, regardless of who those five are.

But this offseason hasn’t afforded the ability to determine “best” in as thorough a way as I’m certain NU’s coaches would have liked. Which means you’re then looking for “safest” and then you’ll adjust as needed down the road.

We’ll see what now happens with left guard. This could all be much to do about nothing, Wilson just flips over and Nebraska goes from there. But the Big Ten’s best win on the line of scrimmage, there’s no such thing as too much ink (or in this case type) spilled over a Big Ten offensive line.

Over the last three seasons, 88 of JD Spielman’s 271 targets came on third or fourth down. Here are the numbers on third and fourth overall:

Someone else was needed in the wideout room before NU lost Spielman. After, well now NU needs quite literally as much help as it can get.

Nebraska was going to be without Spielman throughout spring ball and without the headliners from the 2020 signing class in Omar Manning and Zavier Betts. It was going to be the best opportunity Jamie Nance and Demariyon Houston have had so far in their albeit short Husker careers to impress the coaches. It was going to be early enrollee freshman Alante Brown’s chance to stake his claim to a role. Adrian Martinez was going to have to throw it to somebody.

“Jamie Nance had a really good day which is awesome to see. He looked confident and looked like he was out there to make plays instead of just out there to be a freshman,” Frost said after the first day of practice.

“I thought there were some things the receivers did better today than I’ve seen since I’ve been at Nebraska. I know what kind of coach (Matt Lubick) is and I know he’s going to get guys ready. There’s obviously some guys that we’re thinking might be able to help us this year that aren’t on campus yet so we’re going to have our work cut out for us as a staff to get some of the skill guys ready to play on offense. Trust some new guys to play. I think we went into today’s practice with four scholarship receivers on the field. That’s not near enough. He’s got his work cut out for him but I trust him to get it done.”

When Frost spoke to the media this past week, he dropped the line that Lubick is going to have to “earn his money” in fall camp with regards to getting this wide receiver room ready.

But, asking a new coach to get a room with five newcomers and four other underclassmen ready to provide what Nebraska’s going to need in four weeks is a pretty tall order. That’s not said to contradict what I’ve written before—that NU’s wide receiver haul this class is reason for 2020 optimism—but I think it’s more likely Omar Manning is the wideout version of 2018 Devine Ozigbo than he is someone who goes for 11 catches and 180 yards in the opener against Purdue. This offense is going to need time to get its footing.

For that reason, I keep thinking about Kade Warner’s place in the room. What if one of those personnel decisions Nebraska has already penciled in is a role for Warner as a fallback until others get ready?

Warner is a fourth-year junior who caught 17 balls in 2018 and then eight in 2019. He knows the scheme and knows Martinez. And maybe most importantly, Martinez knows him. Quarterback-wideout chemistry is going to be a talking point in fall camp. So maybe Nebraska feels the safest option is to begin Warner on the outside and tell one of the new guys, “Go take his spot.” If Warner runs with the job, then he runs with the job. If Betts is a guy you can’t justify keeping off the field by the time Week 4 comes around, then you put him on the field and Warner provides you with a proven guy off the bench.

With so much youth in the room, how Nebraska navigates fall camp is going to be interesting. 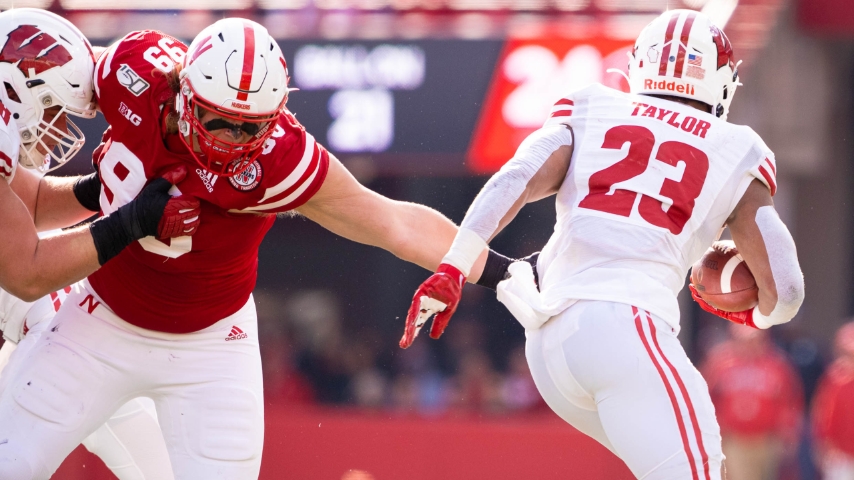 Is Ty Robinson a swing guy? Is he a nose tackle that spells Damion “Snacks” Daniels when he needs a few plays? Is he a starting end?

Ben Stille is going to occupy one side of the first-team line at all times, and justifiably so; the senior-to-be is a leader with loads of playing experience and a Big Ten-forged frame. Nebraska has the aforementioned Daniels, Keem Green and, to a lesser degree, the redshirt-candidate Nash Hutmacher.

In terms of seniority, Robinson is behind guys like Deontre Thomas, Casey Rogers, and Tate Wildeman. Though, as we’ve already discussed with the offensive line, Nebraska is no Wisconsin when it comes to weight-training timelines. If Robinson is the highest-ceiling player and he’s limiting the mistakes, put him on the field.

For 19 of his 23 snaps as a true freshman, Robinson lined up at nose tackle. But 23 snaps in a season is nowhere near large enough a sample size to determine whether he gives NU a better chance to win than, say, Green or Thomas.

Robinson could have had a big spring. Even if not, he could have gone a ways toward answering questions d-line coach Tony Tuioti is presently pondering.

Tuioti has a wealth of guys to work with as he looks to replace all three of his 2019 starters:

Tuioti would like to have eight guys he can rotate at any given point. Robinson will absolutely be among those eight. But where? On the top line? Next man up?

Watch for Robinson’s name when Nebraska begins in mid-July. He was viewed as a huge win in the 2019 class, and he may very well be in a similar spot as Benhart, a guy NU feeds snaps in camp to see what he’s ready for.