Returning somewhat to the mixed bag roots of this column. There are several topics worth discussing this week.

Maybe I’ve discredited just how much of a battle might be taking place in the running back room this fall, should football start as currently scheduled.

If we’re to believe running backs coach Ryan Held’s excitement over his room is genuine and not offseason coach speak—I think we should believe it, Held’s regularly as straight a shooter as they come—then the No. 2 spot behind senior running back Dedrick Mills is going to be one of the more entertaining ones to track this fall.

“I’ve seen him around here and he looks good,” Held said of Mills, the Huskers’ presumed workhorse tailback. “He’s a leader for the guys. He’s the only senior, he’s the only old guy, scholarship-wise, that I have in my group. He’s done a really good job helping the younger guys up to this point. I’m excited about his senior prospectus.”

The leadership part is often overblown but never unimportant. In the years prior to head coach Scott Frost’s arrival, there was a little too much looking out for one’s own self. Guys talked about vets being scared a youngster would take his spot if he helped the newbie too much.

Horizontal leadership and accountability are hallmarks of Frost’s precocious culture concoction in Lincoln, and we’ve seen it grow over the last two years. If the stars are helping the rotational guys, everyone wins. Competition breeds excellence, and if the No. 2 is getting tips from the No. 1, the No. 2 can better push the No. 1.

This is all very common sense stuff you don’t need me belaboring, but in the running back room it could get particularly interesting, because Nebraska has one senior—Mills, a presumptive breakout candidate not just in the Big Ten but across the country in 2020—and then four freshmen.

Nebraska will likely want someone who can complement what Mills brings to the table rather than replicate it, a song of fire and ice so to speak. As it stands right now, the hand to Mills’ king could be any of the four.

Wan’Dale Robinson, used too frequently last season as a guy who lined up in the backfield rather than occasionally motioning there, will be primarily used as a slot wideout this season. Rahmir Johnson and Ronald Thompkins, two redshirt guys a year ago, will duke it out with first-year players Sevion Morrison and Marvin Scott III.

Johnson has spent the offseason bulking up and working on his pass-catching chops. A rounded-out game would make him a pretty clear complement to Mills’ physicality. But Morrison has completely redefined his frame and Scott was already built like a brick **** house, either of those guys seems capable of running at Big Ten defenses in a secondary role once the season begins. If Thompkins is on track the way Held thinks he is, and could give NU something like seven carries a game once the season begins, we should be talking about him a lot more than we currently are.

Ask four people who’s got the best odds at the No. 2 spot and you might get four different answers. Hell, just this week Brandon Vogel said Scott, Greg Smith said Johnson and I said Morrison when we were asked.

Nebraska’s had one 1,000-yard season from a running back since 2014, and that’s understandably been the focal point around here in the years since. But depth in the room (and being able to maintain that depth through a season) is something NU hasn’t had in some time. That might be more important than the top-line guy.

Things happen in football. The uncertainty of this season and what it could entail only ratchets up the unpredictability quotient week to week.

I’m very curious to know what that group as a whole will look like if all five scholarship backs and conceivably make a case for playing time.

This week, the NCAA officially unveiled its set of recommendations for the “Resocialization of Collegiate Sport.” The set of health and safety measures was put together in part with the Power Five conferences. Those leagues are expected to adopt the recommendations unilaterally, creating a baseline standard for testing and response protocols across the country.

Among the most notable: asymptomatic players who return a positive test must self-isolate for 10 days, players and staff must conduct daily temperature checks before entering athletic facilities, masks should be worn when feasible and by anyone standing on a sideline, and testing of teams, as well as game officials, should be conducted within 72 hours of any game.

The burden has been raised by the NCAA. Some of these could and probably will create significant speedbumps for teams if we’re moving through a football season.

Any player deemed to have had “high-risk exposure” must self-quarantine for 14 days. In this case, “high-risk exposure” is defined as being within six feet of someone with the virus for at least 15 minutes. Even if the exposed tests negative for the virus, that 14-day period is still mandatory

Let’s say a second-string nose tackle who just happens to be getting first-team reps on a random Tuesday returns a positive test. Does that mean the entire first-team offensive line who was blocking him, or the defensive ends lined up next to him, or a starting quarterback or running back he tackled now has to complete 14 days of mandatory quarantine?

How do you reconcile being without a starting quarterback for two games when he has potentially tested negative for the virus?

How do coaches divide practice now to counteract that possibility? How does Nebraska? Are intrasquad scrimmages out the window?

Not to say that an abundance of caution is an issue, but the NCAA’s presently proposed guidelines could knock out entire sections of a depth chart for more than just one game at a time. Try playing Ohio State and Penn State in back-to-back weeks with a second-team offensive line.

The NCAA’s also limited by the testing resources at its disposal. A local community with legitimate demand for testing supersedes a college football team regularly testing negative-responding student-athletes. But for this to work without a bubble, they have to be tested as often as possible. A 72-hour turnaround seems about as good as it’s going to get.

Until a player takes a test on Wednesday, goes to a class on Thursday where he contracts the virus, and then returns a negative result on game day. Then there’s a real problem.

What are you going to do, though? What actual safeguard is there for that if the testing isn’t where the NCAA thought it was going to be? Players have to be responsible adults rather than college kids. Teams might need to consider flying into road venues the morning of, going straight to the venue and then flying home after. That might be about it. Logistically, life is going to be maybe more difficult than it ever has been if this gets pulled off.

In an interview with Sam McKewon from the Omaha World-Herald, Nebraska Athletic Director Bill Moos said Nebraska had reached out to the athletic departments at Central Michigan, South Dakota State, and Cincinnati—NU’s three non-conference opponents this season—to inform them the Big Ten’s decision to cancel out-of-league games was coming.

More conversations are expected to follow on what to do about the contractually obligated payouts the three schools are owed. Nebraska had agreed to pay CMU $1.3 million for its trouble, South Dakota State $515,000, and Cincinnati $400,000.

“We’d love to host all three of them at a later date, but that conversation hasn’t happened yet,” Moos told The World-Herald.

The Big Ten could get involved and foot the bill instead of Nebraska, though it probably won’t. The Huskers’ canceled noncon opponents could say, “No harm, no foul,” and walk away, though they probably won’t.

If NU is engaged with the three other schools, it would make the most sense for Nebraska to agree to put future games on the schedule. It would be fair, yes, to pay out to the three schools, but $2.2 million is no chump change in the middle of a financial crisis for the university, especially if your expected revenue takes a bigger hit with each passing day.

In the contracts with each team, Nebraska has a force majeure clause.

Take Sections 9 and 10 from the contract with Central Michigan. 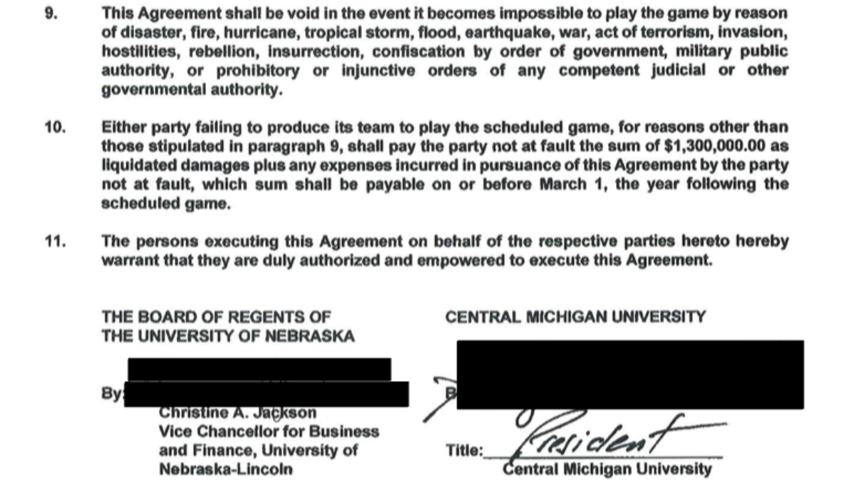 Michael McCann, a legal analyst and senior sports legal reporter for Sportico, wrote about a Pitt-Miami (OH) contract with an identical clause. Neither listed pandemic as a qualified reason, but the wording “impossible to play” makes things tricky from a legal standpoint.

The pandemic is clearly beyond the control of Pittsburgh and Miami. However, the pandemic doesn’t necessarily make playing the game “impossible.” A number of schools have resumed sports, including football, since the pandemic began. Meanwhile, the major pro sports leagues all intend to play games. Whether any fans can attend, or whether all players can participate in, those games doesn’t determine whether their playing is possible.

A conference’s decision to limit play to intraconference games would make out-of-conference matchups “impossible,” at least under conference rules. However, conferences make decisions with the input of members. To that point, the Big Ten made its decision “following many thoughtful conversations” with presidents, chancellors and athletic directors of member schools, as well as other stakeholders. This description relates to key language found in Section 9: To the extent a member school had some level of influence over the conference’s decision, then the “impossibility” of playing games might not be “beyond the control” of the school.

Alan Milstein, a sports attorney in New Jersey, reviewed the three game contracts for the Huskers, though, and said Nebraska had ground to stand on if it wanted to dispute the payouts.

“They don’t list virus, but there’s a mention of civil authority,” he pointed out. If there’s a restriction from state officials in place on gatherings, that would apply. He also said if fans are either allowed into the stands at a reduced capacity or not at all, Nebraska wouldn’t be getting what it bargained for anyway.

“I think Nebraska’s in pretty good ground there by not paying these people,” Milstein said. “I don’t think they’re going to pay ‘em voluntarily, and I think (the out-of-conference schools) lose in any court. … The fact there won’t be any fans or revenue—implied in the contract is that Nebraska’s going to have 80,000 people in the stands and share in the revenue. Because the contract also says, ‘We’re going to give you 1,000 tickets.’ Right? They’re not going to give them 1,000 tickets. You could certainly say it implies there’s going to be all this revenue coming. (Out-of-conference schools) would have to sue (Nebraska) in Nebraska and I can’t imagine a Nebraska judge ruling against them in this instance.”

Of course, if Nebraska just wants to do right by the other three schools and maintain a working relationship moving forward, it’ll pay. NU is set to visit Cincy in 2025 as the second half of the agreed-to home-and-home series. Even if it could get out of payments in the short-term, is reputational damage done down the road worth $2 million and change? Probably not.