On the Friday before the Missouri game in 1992, Tom Osborne would neither confirm nor deny whether Tommie Frazier would be the starting quarterback.

That was the speculation, and not just because Mike Grant, who had started the first five games and played without substitute in two, was bothered by a sore back. But Osborne wouldn’t say which quarterback would be on the field in Columbia for the Huskers’ first series.

Both would see action, he said.

Afterward, Osborne said he had wanted to avoid the hype.

Frazier, of course, started. He was the first freshman quarterback to start at Nebraska in the modern era. And he started not because he had mentioned “transfer” to Osborne following the Arizona State game—the second in a row in which he hadn’t played—but because he had earned the opportunity with “two good weeks of practice” following a Big Eight-opening victory against Oklahoma State.

Nebraska had had an off-week, as it had after Arizona State.

Frazier “deserved a chance,” said Osborne. And he made the most of it, leading the Huskers to a 34-24 victory before a typically hostile crowd of 53,337 at Faurot Field.

Grant played only one series. 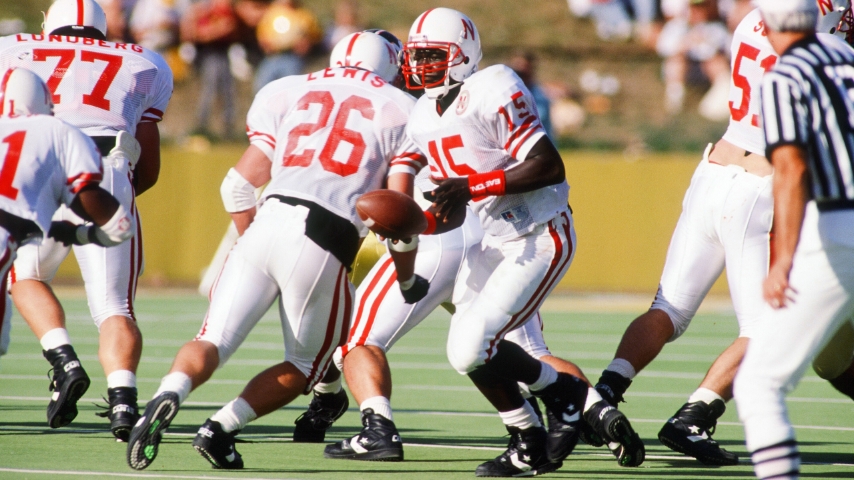 Frazier was Nebraska’s second-leading rusher, with 77 yards on 14 carries, three of which went for touchdowns. The first two came in the first quarter, after which the Huskers led 14-0.

He also completed 9-of-20 passes for 157 yards, without an interception.

He made some mistakes, Frazier said. But he gave himself an A.

“I still remember that I was playing like a deer with its eyes in the headlights; my eyes were wide-open,” he said looking back a dozen years later. “I was just out there playing the game.

“I’m pretty sure I wasn’t perfect, but I knew that the stuff they had me running . . . I was just out there as a true freshman, enjoying playing the game.”

Frazier accounted for not quite half of Nebraska’s 492 yards of offense, 335 of them rushing. Derek Brown led with 151 yards on 25 carries and caught four passes for 53 yards. Calvin Jones carried 17 times for 74 yards and the Huskers’ other touchdown, while Byron Bennett kicked two field goals.

But the game was a story of two quarterbacks, Frazier and Missouri sophomore Jeff Handy, who started for the second week in a row after Phil Johnson was injured.

John Reece and Kenny Wilhite made the interceptions.

Wilhite’s came midway through the second quarter, and his 49-yard return to the Missouri 20-yard line set up the Huskers’ third touchdown, as they regained the lead 21-14.

Missouri, which dropped to 1-6, managed only 22 net yards rushing. But Handy’s 480 passing yards and 29 completions were records against the Huskers and would be the basis for concern when they played Colorado the next week. The Buffs, who would be tied with Nebraska at No. 8 in the AP rankings, were led by quarterbacks Kordell Stewart and Koy Detmer, both of whom were passing threats, and wide receivers Michael Westbrook and Charles Johnson, who each would finish with more than 1,000 receiving yards that season.

Detmer had started when Stewart was sidelined with a broken bone in his wrist.