Last season, both of Nebraska’s team captains on the offensive side were underclassmen. So it shouldn’t have come as a surprise when Matt Farniok and Adrian Martinez were both voted as repeat captains.

However, the other three captains determined by the team vote over the weekend are first-timers: junior wide receiver Kade Warner, senior cornerback Dicaprio Bootle and senior linebacker Collin Miller.

Perhaps the biggest surprise was Warner, the former walk-on who earned a scholarship with his work over the past two seasons. Warner himself was caught off guard by the news.

“It’s an incredible honor,” Warner told reporters during a Zoom call on Monday. “Whenever you have an award that’s based on your teammates voting, it really hits home and speaks to who you are and who the team thinks you are. So it was an incredible honor. I’m blessed to be in the position I am. I didn’t expect for it to happen. I was sitting there and Coach said ‘We’re going to have five captains this year,’ and I said ‘Oh, OK.’ Then he said ‘Three on the offensive side,’ and I said ‘Oh, OK.’ Then he said my name and a bunch of emotions rushed through my head. It was great to see guys congratulate me. I love this team and I’m going to continue to work for them.” 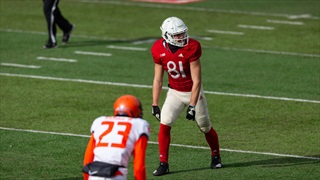 Warner is the most experienced player in a very young receiver room and has taken a lot of the newcomers under his wing, as Derek Peterson detailed here. He also is currently sporting a tremendous mustache, which no doubt scored him a couple extra points with his teammates.

Kade said his dad, Pro Football Hall of Fame quarterback Kurt Warner, played a major part in developing his love for and knowledge of the game. Even now, Kurt is constantly sending him texts and videos about routes and concepts he’s seeing in the NFL, and Kade isn’t shy about reaching out any time he has a question of his own. Kade also said his mom, Brenda, wants to start getting some credit in his interviews as well since Kurt is all anyone asks about. Brenda isn’t focused on the football, but rather Kade’s effort; she’s always asking him “Did you do your best work?”, and that’s resonated with him throughout his life.

Warner got a head start on stepping into a leadership role with those Monday Night Football film sessions, but he plans on leaning on the two repeat captains as much as he can while he continues to grow into that captainship.

“It’s amazing for them to be leaders more than one year,” Warner said. “Back-to-back is incredible. So I’m going to look to them for examples on how to be a leader. They’ve both been great leaders since I’ve been here. It’s obviously a different mindset when it comes to that, so I’m going to look to them for that. But they’re going to do a great job of leading this team and helping me lead as well. They are basically my mentors for a little bit as I figure out how to become a captain. But I’m excited to be a captain with those guys.”

On the other side of the ball, Nebraska will have two new captains leading the way with Mohamed Barry and Darrion Daniels moving on.

The secondary could be the strength of the defense this season with three seniors and a junior expected to start, and Bootle is the one who the players chose to represent that group. 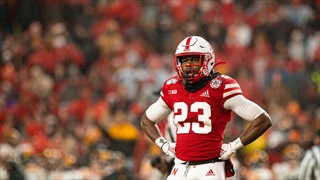 “It means a lot to me, just to know that guys respect me in that way,” Bootle said. “Over the years I’ve paid my dues, just being here. I came in 2016, redshirted and just worked my way up the totem pole. Just continued to go at it year after year, day after day and I think the guys really see that and they really see me as somebody they can lean on and somebody that is always going to have their best interests at heart and is always going to try to point them in the right direction and let them know whether they’re right, whether they’re wrong, and ways that we can fix multiple things, not even just in football but in life as well. It means the most to me to know that the guys really respect me and really feel that way about me. I’m going to do my best as a leader to put my best foot forward for them.”

Bootle also reminisced on his path to Lincoln, which Erin Sorensen detailed for the Hail Varsity 2020 Nebraska Football Yearbook.

The final nod could have gone to any number of guys on the defensive side of the ball, but the Huskers chose Collin Miller, a senior that’s been through a lot since he arrived on campus in 2016.

“To be a captain means the world,” Miller said. “Seeing my fellow teammates vote me, I was jaw-dropped. Them thinking that I’m their role model and how to go about the program, how to get things done and to get Nebraska back to what it was is just unbelievable, just something that I’ll remember for the rest of my life. When they called my name, it took me a second to kind of bring it all in and whatnot. But it was unbelievable.

Miller committed to Nebraska as a defensive end under line coach Hank Hughes, but by the time he got to Lincoln Hughes was already gone. Miller played defensive end during his redshirt year and earned Scout Team MVP honors. He moved to linebacker in 2017 and has played in every game since. Miller bounced back and forth between the outside and inside linebacker positions before settling in as the starter alongside Mo Barry on the interior last season. 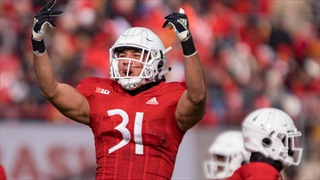 He’s played under three defensive coordinators (Mark Banker, Bob Diaco and Erik Chinander) and four different positions coaches (John Parrella, Trent Bray, Jovan Dewitt and Barrett Ruud). Miller said playing different positions has helped him become the player he is today and he’s learned things on and off the field from all of the coaches he’s had at Nebraska.

Now, with Barry gone and with a second straight year at the same position under the same coaches, it’s Miller’s turn to lead.

“Definitely just being a leader kind of came to me as I got comfortable with playing inside linebacker,” Miller said. “Bouncing around a little bit, it’s kind of hard because you’re trying to learn the system, learn the scheme, learn your position. You can’t really be a leader because you are still trying to learn. Just being in Barrett Ruud’s inside linebacker group for a little bit and going along in Barrett Ruud’s situation, you had so many leaders in there — Mohamed Barry, and everybody else like that just doing a great job of showing you what a leader is.”

Player leaderships was more important than ever before during the longest offseason any of these players and coaches have ever experienced, and Coach Scott Frost said he was pleased with what he saw and heard from a number of guys in that area. However, these five separated themselves in the eyes of their peers.

“They’ve all done a good job leading,” Frost said. “There’s a lot of times this offseason where the coaches haven’t been able to be involved and the players had to step up and do a lot of things. It’s not just these five, I think there’s a lot of guys that the team look to as leaders. A lot of players on our team that got votes, but these five were out in front in the voting and I think the players respect them and look to them as leaders.”