The Papillion-La Vista Monarchs opened the season at the Bellevue West Invitational last weekend, winning their pool to advance to the championship bracket where the host Thunderbirds awaited in the quarterfinals.

Papio took the first set, but the Thunderbirds rallied to takes sets two and three and send the Monarchs into the consolation side of the bracket. Bellevue West took third place in the tournament while Papillion-La Vista took fifth.

The Monarchs didn’t have to wait long for a chance to even the score, however, as the two teams were scheduled to play a regular-season match on Thursday. This time, Papillion-La Vista had the home court advantage.

“Yesterday we were watching some film and trying to strategize against them because that was a tough loss for us,” Papillion-La Vista senior outside hitter Norah Sis said. “I think watching the film really helped and we had a lot of motivation because nobody on our team likes to lose.”

The Monarchs also got a little extra motivation as the school held senior night festivities to honor the five seniors on the team before the match. Schools are holding senior nights early on in case the season gets derailed by the COVID-19 pandemic.

“It means a lot,” Sis said. “They’re a really good team, so I think that’s a big confidence-booster for us. It was a really competitive match and it was really fun to see. After the third set, we made some changes and we really got motivated and figured out our groove.”

The Monarchs jumped out to a 9-3 lead and never looked backed in a dominant first set. Destiny Ndam-Simpson, Bellevue West’s standout sophomore outside hitter, notched nine kills in the first set alone. 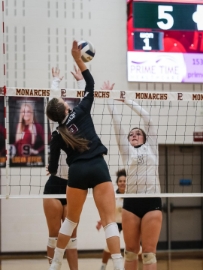 Papio led most of the way in the second set and held off a late Bellevue West rally to even the match at one set apiece. Sis, a Creighton commit, came alive with seven kills.

Bellevue West used a 12-6 run to take control in the third set and cruised to the win, but the frame featured a scary moment for the Monarchs as senior middle blocker Logan Jeffus stepped on another player’s foot, rolled her ankle and hit the floor. The trainer attended to her for several minutes, but she eventually got back up, tightened her laces and stayed in the match.

“I told her at the end, ‘That’s grit,’” Papillion-La Vista coach John Svehla said. “She showed grit and that’s what we need. We have seven new players on our team this year and we’re going to be scrapping and clawing. That’s a senior leader right there saying ‘I’m not coming out.’ Not only did she not come out, she made some huge plays for us there after it happened.”

After a 10-4 Papio run gave the Monarchs an 18-12 lead in the next set, Bellevue West mounted a fierce comeback, looking to end the match in four. The Thunderbirds ripped off a 6-1 run to cut the deficit to one at 19-18. Then Sis took over, notching three kills in the next seven rallies to help give the Monarchs set point.

“We have to have Norah,” Svehla said. “We’ve just come to expect that with her. She showed up tonight big, at the end she showed up, and it was fun to watch.”

Jeffus, a Louisiana-Monroe commit, finished it off with an overpass kill.

Bellevue West made the first push in the fifth set, taking a 9-7 lead and drawing a timeout from the Monarchs. The Thunderbirds started to unravel a bit from there, however, as Papio stepped up up the pressure and responded with a 4-0 run aided by three Bellevue West attack errors. Ndam-Simpson blasted a back-row kill to pull her team within one at 11-10, but Papillion-La Vista closed it out with a 4-0 run as Jeffus teamed up with sophomore Anna Sis for a block on match point.

Papillion-La Vista finished it with a block on match-point to win the fifth 15-10. #nebpreps pic.twitter.com/VYAtqOHue2

“It’s about executing what you need to do and I felt we did that,” Svehla said. “I felt our serve was effective when we needed it to be. Then our defense ended up picking up there in game four and five. We were pretty inconsistent defensively and we had girls step up defensively and get some key blocks at key times.”

Sis finished with 27 kills on .444 hitting to lead the way for the Monarchs. Jeffus added 12 kills on .375 hitting and four blocks. Morgan Hickey, a senior outside hitter, chipped in 11 kills.

Ndam-Simpson set a school record with 28 kills on .351 hitting and she also served up three aces.

Junior middle blocker/opposite hitter Kealy Kiviniemi dominated alongside Ndam-Simpson early on and finished with 18 kills on .417 hitting while setter Jayna Hope did a bit of everything with 24 assists, four aces, three kills and a block.

The Thunderbirds fell to 4-3 (their other losses coming against Omaha Skutt and Papillion-La Vista South, two of the best teams in the state) while the Monarchs improved to 5-3.

Papillion-La Vista went 36-2 in 2019 but only returned four players who saw significant playing time and added two freshmen and a sophomore to the rotation. This season has included some early growing pains, but Sis sees a bright future for her team.

“I think we’re going to do very well,” Sis said. “We do have a lot of underclassmen and players new to varsity. As juniors and seniors it’s our job to lead them and make sure they know the culture and just get them motivated and show them what it’s like to be a winning team.”