In a pre-COVID world, the Omaha Skutt SkyHawks were set to spend this weekend at a tournament in Las Vegas. Obviously, the pandemic changed those plans. Fortunately, Papillion-La Vista had a team drop out of the Allison Weston Monarch Invitational, creating an opening for the SkyHawks to join the field.

Skutt drew the host Monarchs in the first match of the tournament on Friday afternoon. That meant, for one hour at least, a friendship became a rivalry.

Skutt senior Lindsay Krause is the second-ranked player in the country according to PrepVolleyball.com. Papillion-La Vista senior Norah Sis is ranked 28th. They’re two of the best outside hitters in the country. They also happen to be best friends.

Krause and Sis have played club ball together since they were 11 years old. They took different paths in high school, but each of them developed into one of the premier players in her class, earning accolades and leading her team to success. 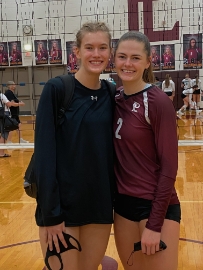 Last year, the Monarchs went 36-1 during the regular season before suffering a heartbreaking four-set loss to Millard North in the first round of the Class A State Tournament. Despite her own disappointment, Sis showed up for the Class B final that Saturday to watch her friend lead the SkyHawks to their fifth straight state title.

The two have only faced each other their freshman year. Sis’ Monarchs got the better of Krause’s SkyHawks in a sweep during the Bellevue West Invitational. Sis led Papio with eight kills while Krause chipped in five for Skutt. Skutt evened the score against the Monarchs later in the season during the Midwest Showcase at Ralston Arenawith a 3-1 win. Krause had 16 kills and Sis had 14.

Skutt and Papillion-La Vista didn’t play each other in 2018, and last season Krause was with the USA Junior National Team when they squared off (the Monarchs won that one).

Papillion-La Vista and Skutt both competed in the Bellevue West Invitational again this year, but their paths didn’t cross as SkyHawks went on to win the tournament while the Monarchs fell into the consolation bracket. Fortunately, they got a second chance to face each other in Papio’s tournament. Krause told me the two of them were really looking forward to the match.

“It really is cool because we haven’t played each other since freshman year in an organized game, and we’ve always been on the same team,” Krause said. “We’re both pretty high-level athletes so it’s just really fun to play against each other.”

Krause won the rubber match with Sis on Friday, leading the SkyHawks to a 25-11, 25-22 sweep. Krause finished with 18 kills on .485 hitting and four aces while Sis led the Monarchs with nine kills.

“I think we both love the game so much and we know how good of friends we are but we are really good about, like, it’s game time and we are not friends anymore,” Krause said. “If we have a weakness, that person knows the weakness and we’re going to exploit that. We’re really good friends so it’s just like right after the match we can go mess around with each other, but it was just super fun to play each other.”

As fun as the match was, Krause much prefers playing on the same side of the net as Sis. They form a formidable one-two punch for Premier Volleyball.

“I like to joke that we’re the best outside hitter duo in the country,” Krause said. “I joke about it, but I also kind of think it’s true. We love playing together and we’re just really good friends.”

Krause committed to Nebraska in June of 2017, before her freshman year of high school. In September of 2018, Sis committed to the other high-major program in the state, Creighton.

“I was really happy for her, almost because we get to stay close to each other,” Krause said. “I knew Creighton was such a powerhouse school and I was super happy for her because that’s such a great opportunity for her and I knew she wanted to stay home just like I did. Just to have her close is really fun.”

The two should get a few more opportunities to play against each other at the next level, but before that they have the rest of theirsenior year.

Skutt went 3-0 on Friday to win Pool A while the Monarchs won their last two matches to finish second. Both teams advanced to Saturday morning’s semifinals. However, the SkyHawks fell while the Monarchs moved on to the final. Instead of heading home after the third-place match, Krause and her dad, Pat, stuck around to watch Sis lead Papio to victory in the final.

Heading into the Monarch Invitational, I think most volleyball enthusiasts expected we’d see a rematch between Omaha Skutt and Papillion-La Vista South in the bracket portion of the tournament, and that’s exactly what we got — only it was in the third-place game.

Skutt was No. 1 and Papio South was No. 5 in PrepVolleyball.com’s national Power 25 rankings that debuted earlier in the week. Yet an 8-5 Lincoln Southwest team grounded the SkyHawks and the Titans got swept by their Papio rivals after beating them in five sets earlier in the season.

Elkhorn South (No. 2 in the Power 25) is the only remaining unbeaten team in Nebraska’s top two classes, and even the Storm dropped a couple of sets last weekend at the LPS Classic.

Nebraska has a lot of talent, so teams better bring it each and every time they take the court. Who are the best teams in Class A?

“Let me roll the dice,” Papillion-La Vista coach John Svehla said. “It’s so competitive. There are so many great teams and really good teams. It doesn’t matter if you’re one or 10. What was Southwest coming in here? I don’t know exactly but that’s a heck of a team right there. Millard West doesn’t even make it to the gold portion of the tournament and they’re a heck of a team. It’s a fun year, I’m thankful we’re playing and on any given night, anybody can win.”

John S. Peterson
Norris junior Maisie Boesiger is one of many talented setters in Nebraska.

“The setters guide the offense and when you have somebody that can put your hitters in good positions, even on a semi-good pass or a bad pass, it makes your offense look a lot better,” Svehla said.

Svehla has a pretty good young setter on his hands as well. I wrote about her last week, but freshman setter Reagan Hickey continues to get better and better every time I see her play (which has pretty much been every week at this point with how the schedules have shaken out).

“She’s another one that’s put in a lot of time to get better and continues to gain confidence,” Svehla said. “It’s intimidating when you have Norah and your sister (Morgan Hickey) as seniors and you’re a freshman setter pushing the ball to them. She’s really gotten more consistent. She’s really kind of taken charge — I don’t care if you’re a freshman or a senior, you’re the setter, you have to take charge of the offense and take ownership of it and she really has. She’s done a nice job for us.”

I haven’t even gotten a chance yet to see Elle Glock. The highly-touted setter at Wahoo is committed to USC and has her team off to a 13-0 start. The level of volleyball we’re seeing in this state is directly tied to the amount of talent we have at the setter position.