I closed out a volleyball-heavy week on Saturday at Omaha Skutt by covering the 2020 SkyHawk Invitational. The tournament brought together some of the best teams from Nebraska as well a couple of squads from outside of the state for a five-team round-robin event.

The host SkyHawks took home the title with a 4-0 record and the headline match was the showdown between two future Huskers in Skutt’s Lindsay Krause and West Des Moines Valley’s Hayden Kubik, but there are other storylines worth discussing from the tournament and the past week as a whole. Let’s get to it.

Krause, the second-ranked recruit in the country, continued her dominant senior season this weekend. In four sweeps, she averaged 5.63 kills per set on .463 hitting and served up eight aces. Through 20 matches, the 6-foot-4 outside hitter is averaging 5.5 kills per set on .455 hitting. She’s also second on the team in digs behind libero Bre Skala, averaging a career-high 3.2 digs per set.

“She’s having an All-American season,” Skutt coach Renee Saunders said. “She’s probably hitting almost .500. All of our kids are getting a decent amount of sets but when you have someone who’s hitting .500, it looks like they’re getting all the balls. Our offense has been very balanced, which has helped, but her termination has been unheard of. You throw the ball up, there’s a 50-50 chance she’s going to get a kill. Plus her back row, her serving has come around. She’s become an all-around player as a senior.”

A big difference this season has been that Krause has been able to play every match for the SkyHawks. The past two years, she’s missed part of the season while competing with the USA youth national team.

“I love getting to play, the opportunity with USA, but I also love my high school team so much and I love getting the chance to play with them the whole season,” Krause said. “It was just super special, especially with it being my last season.”

Saunders joked that it’s been “weird” having Krause around so much.

“I’m sick of her already,” Saunders said as Krause walked by. “No, she’s a great kid. She’s so fun and she’s a competitor. Having her all year long has been nice. We were so used to not having her at the beginning, other people learned to step up. We didn’t have to do that [this year] and I think that was part of our problem early on. Other people were kind of depending on her when we have the talent to do it everywhere. So it was kind of nice to see the rest of the team now step up and then see her just continue to get better every match.”

In addition to Krause, Skutt had four hitters average at least 1.5 kills per set on .200 hitting or better. Junior middle blocker Ava Heyne had a great weekend with 2.9 kills per set on .380 hitting and senior setter Allie Gray masterfully orchestrated the offense all weekend, averaging 13.6 assists per set and chipping in three kills on three well-timed attempts (including match-point against Valley).

Krause is the best in the country at what she does, but the SkyHawks have plenty of firepower around her.

Getting over the Hump 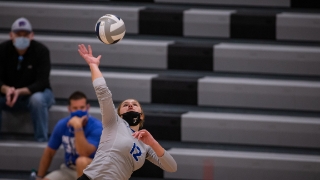 “I want our confidence to grow with them,” Papio South coach Katie Tarman said. “We’re a good team, and I don’t always know that we believe in ourselves during those matches. We believe in ourselves in other matches, but I think we can learn how to be confident in that match as well. They are a very solid team and it’s not just Lindsay on that team — there are a lot of really good kids. That’s where we need to get stronger is honestly in our confidence.”

Tarman is right, she has a really good team on her hands — one of the best in Class A. The Titans were sitting at 18-17 late in last season before they hit their stride, winning eight of their last nine route to a state title. This season, Papio South is 24-4, and three of those losses have come to the SkyHawks, one of the best teams in the country. No shame in that, and the Titans won’t have to see Skutt in the Class A state tournament.

With talented young hitters like sophomore Stella Adeyemi and freshman Lauren Medeck and a setter like junior Ava LeGrand, they should enter the postseason as one of the favorites in their class.

High-major programs around the country are lucky that Nebraska is recruiting at such an incredibly high level. There are some talented setters in Nebraska’s 2021 class, but John Cook received a commitment from the top recruit in the country at that position in Eagan, Minnesota, product Kennedi Orr.

With that position filled down in Lincoln, the borders were wide open to other programs looking to find their next setter. Two of the best setters in the state played at Skutt on Saturday.

I mentioned LeGrand above, and although she’s a 2022 recruit she’s worth a mention here. She’s not your typical setter; at 6-foot, she can make her presence felt in multiple ways beyond just running Papio South’s offense. The biggest example of that is how aggressive she is offensively. LeGrand is always looking for an opening to attack herself, and she showed that off in Papio South’s wins against St. Teresa’s Academy and Lincoln East, averaging 2.0 kills per set in addition to dishing out 10.4 assists per set. She’s committed to Kansas State.

“It’s wonderful,” Tarman said about LeGrand’s aggressiveness. “I would love to run an offense where I was able to use her a little bit more, but it makes her very diverse and we can run a lot of things using that.” 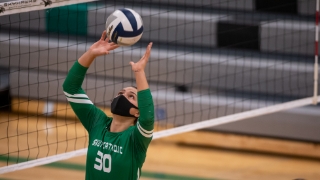 John S. Peterson
Skutt senior Allie Gray sets the ball during the SkyHawk Invitational. She led Skutt to a 4-0 record while averaging 13.6 assists per set.

The other standout setter on Saturday was Gray for Skutt. In addition to what she did as a distributor running the offense and her timely kills, she also averaged 2.3 digs and 1.0 block per set. Gray is so fundamentally sound with her footwork and the way she positions her body on sets and she has a tremendous feel for where to go with the ball at all times. She’s headed to Arizona State this season.

Earlier in the week, I saw Wahoo’s Elle Glock for the first time. She’s the daughter of former Nebraska basketball player Jason Glock and has led the Warriors to a 22-0 record thus far while averaging 10.8 assists and 2.7 digs per set. She has 34 kills on 49 attempts with just three errors, evidence of how smart she is as a player. Glock is committed to USC.

Cook has one of his best recruiting classes he’s every had this season and already has three commits for 2022 as well, and five of those nine players are from Nebraska. Even so, there’s still plenty of talent Nebraska doesn’t have room for and programs all across the country are benefiting.

Easier this week, the NSAA announced a new format for this year’s volleyball state tournament: it will last four days — Wednesday through Saturday — and all the matches will take place at Pinnacle Bank Arena.

The first round for classes A, B and C1 will be on Wednesday, Nov. 4 while classes C2, D1 and D2 will play on Thursday. The semifinals will be on Friday with the finals to follow on Saturday.

Tarman, who led her team to three wins in three days last year, was excited about the pandemic-spurred change. 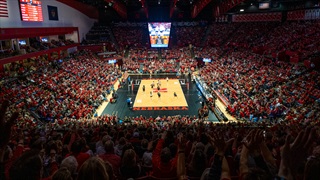 “I love it,” Tarman told Hail Varsity. ‘I’m excited for having the day off the next day. That will be nice to recover a little bit. I think it’s a smart decision.”

Norris coach Christina Boesiger is a fan as well

“I think it’s awesome,” Boesiger told me via text. “What a great experience for the teams that don’t get to play there normally, and for the Wednesday teams (that win their first round game) to have Thursday off to prepare is definitely a positive.”

The big drawback, however, is that teams won’t get a chance to play at the Devaney Center, and that’s the part that has players like Krause disappointed. In Nebraska, the Devaney Center is the biggest volleyball stage because that’s where the Huskers play and where they sell out every match. One facility will make it easier for NSAA officials to coordinate everything and the bigger arena could allow for more fans to attend depending on where Lincoln stands with the coronavirus next month.

“I’m not going to complain about anything this year because there are people not playing,” Saunders said. “I’m just happy to play volleyball.”