Midway through Tuesday’s match in Wahoo, it looked like the Warriors were going to steamroll Waverly for their 19th straight win. Then the Vikings woke up and gave the undefeated Warriors everything they could handle in sets three and four before Wahoo pulled away down the stretch to finish off a 3-1 win.

“Waverly’s an amazing team,” Wahoo coach Trish Larson said. “They’re solid and we knew they weren’t just going to quit. We expected a tough match and they gave it to us.”

Whether it was aggressive serving or powerful swings, Wahoo kept Waverly out of sorts throughout the first two sets, jumping out to 10-5 leads in both games and never looking back. Waverly did make a late push in set one to trim an eight-point deficit down to five before a service error ended it. Game two was all Warriors from start to finish. Mya Larson had nearly as many kills herself as the entire Waverly team did in the first two sets with 12 of them. 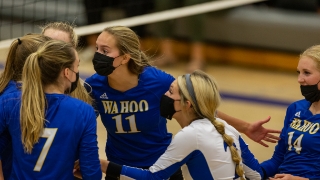 “We were pretty consistent tonight,” Trish Larson said. “Our game plan was to serve tough — serving and passing is always key and I thought they consistently did that tonight … They were out of system a lot and they were scrambling. All year our goal has been consistency and just to stay organized and create opportunities in tough situations.”

Nebraska commit Whitney Lauenstein wasn’t going to let her team go out like that, however. After totaling just seven kills in the first two sets, she exploded for eight in the third to lead the Vikings to victory and extend the match.

Wahoo broke a 10-10 tie with a 4-0 run and looked headed for a sweep, especially when Waverly opposite hitter Kara Kassebaum tripped over a teammate and injured her ankle, needing help to leave the court. Wahoo pushed the lead to 18-13 before the Vikings began their rally with a 4-0 run of their own. Another 4-0 Waverly run gave the Vikings a 22-20 lead before back-to-back kills by Mya Larson tied it up.

Lauenstein took over from there, closing out the set with three straight kills including one where she blasted the ball off a defender on the right side so hard that it bounced back over the net and went out of bounds on the left side.

Waverly carried its momentum over to the fourth set, jumping out to a 3-0 lead including a pair of aces by senior setter Maddy Wells. The Vikings extended their lead to 9-3 before Wahoo settled in and responded with a 6-1 run to cut the deficit to one. Waverly stretched it back out to five at 15-10, but the Warriors pushed back with a 6-0 run to take the lead.

Junior middle blocker Bekka Allick, a Nebraska commit, skied for a kill to tie it up at 16-all but injured her ankle as she landed. Allick hit the ground and stayed there for a while as the trainers looked at her. She eventually was able to walk off the court under her own power but did not return to the game.

Down two girls, Waverly continued to fight. Wahoo pulled ahead by two, Waverly responded with a 3-0 run to regain the lead, the Warriors jumped in front 21-20 and the Vikings tied it up on the next point.

The Warriors were too much down the stretch, however, as Wahoo closed the match on a 4-1 run with Larson delivering the final kill.

Wahoo closes it out in four, 25-22. Mya Larson on the match-point kill. #nebpreps pic.twitter.com/QlTH4Mhoof

“It was like we didn’t even show up in sets one and two,” Neujahr said. “It took us forever to get going. It’s like Wahoo was playing not just a quarter-step but a half a step faster and sometimes a full step faster than my whole team was, and that’s very unlike us. But that was gritty at the end to win three and then almost to win four. I’m super proud of them for that. They started playing a little more up-tempo and started hanging with the adjustments we were asking them to make.”

After being held without a kill in the first two sets, Allick notched seven kills in the last two sets before she went down. She was a force at the net defensively as well with five blocks. 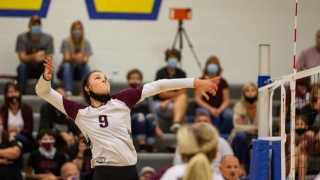 John S. Peterson
Nebraska commit and Waverly senior Whitney Lauenstein elevates for a swing against Wahoo. She led the VIkings with 21 kills.

Lauenstein led the Vikings with 21 kills on .264 hitting including 14 kills in the last two sets.

“She’s amazing,” Larson said about the Waverly star. “It’s pretty scary how high she can jump and how hard she can hit it. Credit to her, she’s a great kid. We know her just through the club scene. Our girls play on the same club as she does and she’s just an amazing player.”

Mya Larson, one of the top uncommitted players in the state, posted a season-high 28 kills on .397 hitting as well as 26 digs and two aces. Senior Kelsie Sears added 15 kills and 11 digs. Senior setter Elle Glock, a USC commit, finished with 48 assists, 10 digs and two solo blocks.

“They don’t make a lot of errors and Glock just makes them so good,” Neujahr said. “She’s so experienced and she can put the ball exactly where the attacker needs it to exploit whatever’s happening on the other side of the net … She makes the Wahoo Warriors run … Mya on the outside and Sears, they played great tonight. Mya’s just so smart; she has all the shots and she just swings away and puts the ball in a great place.”

Wahoo dropped a set in each of its first two matches in a tournament during the first week of the season but followed that up with 16 straight sweeps. The Vikings, one of the top teams in Class B, joined Norris and Aurora as the only teams to take a set off the Warriors so far this season.

“I think it was good to be challenged and to go to four sets; we haven’t had to do that yet,” Trish Larson said. “Playing tough teams like that, and especially these last two sets, that was really good for us and our confidence level.”

Wahoo will travel to Nebraska City then host Plattsmouth next week before closing out the regular season in a triangular at Bennington.

Waverly (13-5) has a tough stretch to close out the regular season with Bennington on Thursday, a trip to Omaha Duchesne next Tuesday and Thursday home matches against Omaha Westside and Elkhorn.